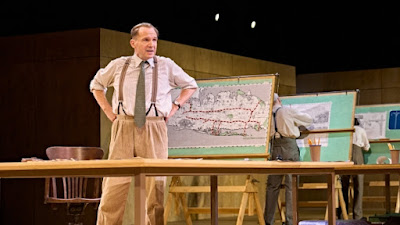 God, it was boring! Quite a few people left at the interval. And there was a lot of yawning from those of us that stayed.

Ralph Fiennes stars as Robert Moses - the New York public official whose lust for power, questionable ethics, vindictiveness, and racism led him to literally bulldoze his way through much of Long Island and Manhattan.

He created roads, roads and more roads along with many bridges, playgrounds (mainly in white neighbourhoods) and parks - but provided little by way of mass transportation.

For forty uninterrupted years, Robert Moses was the most powerful man in New York. Though never elected to office, he manipulated those who were through a mix of guile, charm and intimidation.

But boy did the story - a potentially interesting BBC Four documentary perhaps? - drag. We just didn't care about anyone. Drama comes from conflict. And the conflict here, despite having some potential - the black groups protesting the demolition of their homes - was largely unrealised. It was just all very flat.