On Wednesday night I went to see the musical Frozen at Theatre Royal Drury Lane in London's glitzy West End.

This musical extravaganza about estranged sisters, an icy kingdom and unharnessed supernatural powers arrived in the West End from Broadway as part of a plan to stage five Frozens around the world in one year. As canny as that seems commercially, a mega-successful animation does not always translate into a stage hit, even with Disney money thrown at it.

Only, like The Lion King, this one does. It's a hit!

The show is packed with visual thrills, gorgeous choreography (by Rob Ashford), and those lovely signature ballads. It is big on spectacle yet never loses control with special effects that yield some dazzling coups de theatre. And yet, beyond those visual thrills and powerful ballads, this adaptation brings an unexpected depth to the relationship between two tortured sisters.

Directed by Michael Grandage, it has music and lyrics by Kristen Anderson-Lopez and Robert Lopez – who created the songs for the film – and a book by Jennifer Lee, who wrote the screenplay. The production takes a few scenes to come into its own and the opening appears like a too-exact replica of the animation. Young Anna wistfully sings about building a snowman with her sister outside the room in which Elsa has barricaded herself, playing out the same tics and vocal inflections of her cartoon counterpart. It carries that ersatz feel even as the older versions of the sisters are introduced - bold, goofy, full of yearning Anna - and Elsa, a melancholy ice queen from the off.

Gradually, however, it grows to become its own magical thing, with some charming inventions and a few new songs (the best of which is an audacious comic number, appearing out of nowhere to satirise the Nordic notion of hygge as naked characters conga out of a sauna). What is more surprising than the uniformly storming singing voices and the theatrical razzmatazz is the sense of a real, beating heart in the relationship between the two tortured sisters.

Elsa is soaked with sadness as she speaks of the “monstrous” magic within her and the stage comes alive every time she sings. She is a far more emotionally expressive princess than in the film – an oddball stranded with her super-powers, like a lonely character from The Incredibles. The Oscar-winning power ballad Let It Go grows in strength here, saturated with emotional drama as she sheds off her old identity to embrace the magic within and take control of her destiny.

Based on Hans Christian Andersen’s The Snow Queen, the story has darkness at its heart with the death of parents and the difficulties of sisterhood. It is revised in a way to contain not just self-acceptance and empowerment but also to resist simplified notions of good and bad – when Elsa strikes a fatal shard of ice into Anna’s heart, we do not consider her the “evil” snow queen. And while the sisters harm each other, they save each other too and bear flecks of Angela Carter’s brave, misbehaving girls in their adventuring fairy-tale spirits.

The ice-seller Kristoff is lumbering, earnest and utterly winning as Anna’s sidekick and Anna’s beau, Hans, is duly duplicitous. There is nifty puppetry too: Olaf the snowman is manipulated by Craig Gallivan who looks, disconcertingly, just like him minus the carrot for a nose, while Kristoff’s reindeer, Sven, is a big, delightful puppet. There are nimbly executed freezing effects when Elsa unwittingly casts her spell and then, at the end, the landscape melts back to warm colours. These transformational moments video-designed by Finn Ross are big and blinding, and there are breath-taking displays of fizzing light (by Neil Austin) and crackling sound (by Peter Hylenski).

Christopher Oram’s set design bears layers of visual effects, from a back screen of sky that conjures a perpetual swirl of the Northern Lights and an intricate grid of snowflakes. A central costume change – when Elsa is turned from a dutiful royal in robes to shimmering ice queen, dressed in white – brings gasps from adults as well as children in the audience.

The messages at this story’s core may be typically saccharine Disney ones – that it is vital to embrace your own magic and that love can thaw the coldest of hearts ­– but they are nevertheless true and important for the army of young Elsas and Annas out there. 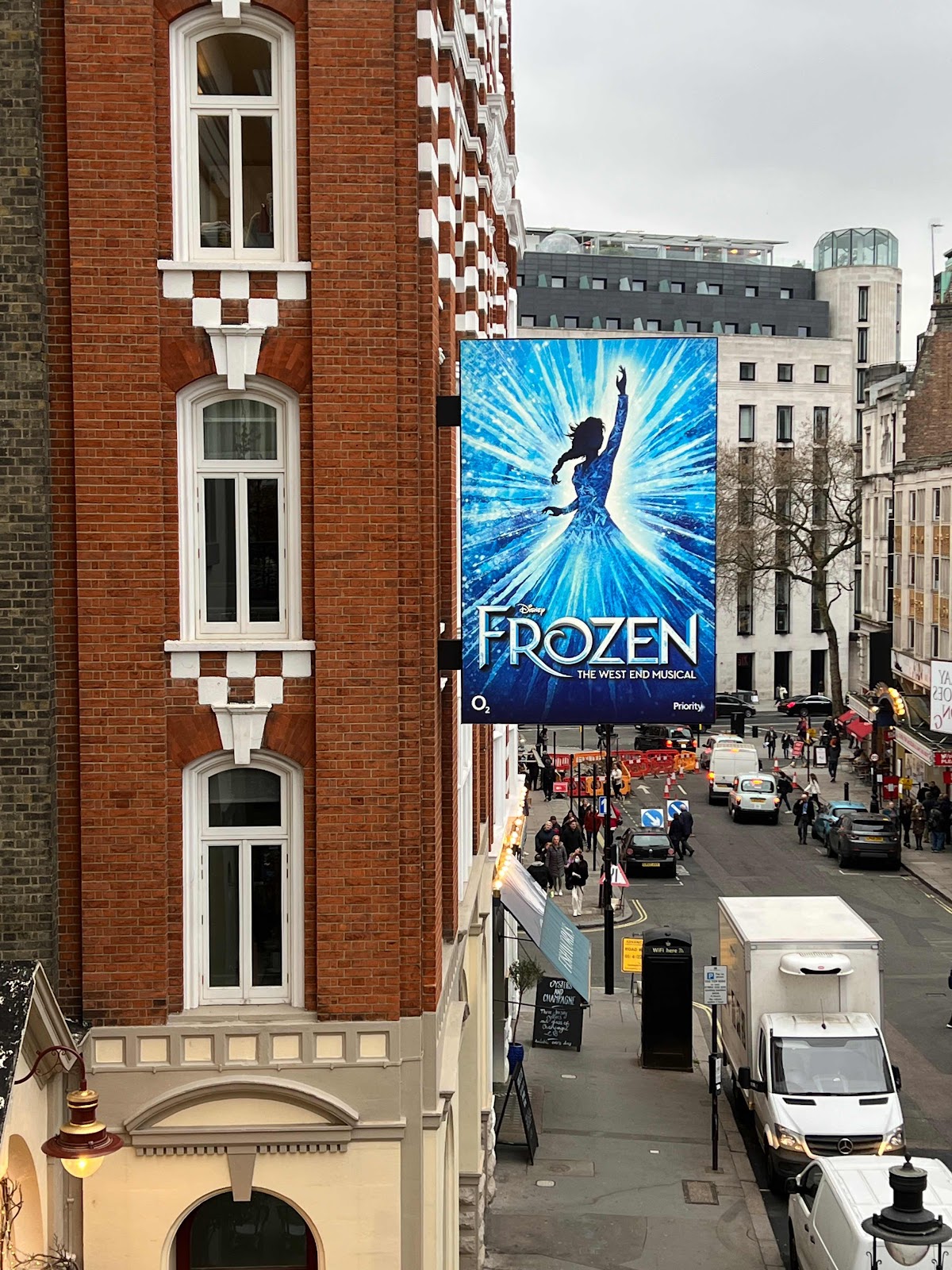 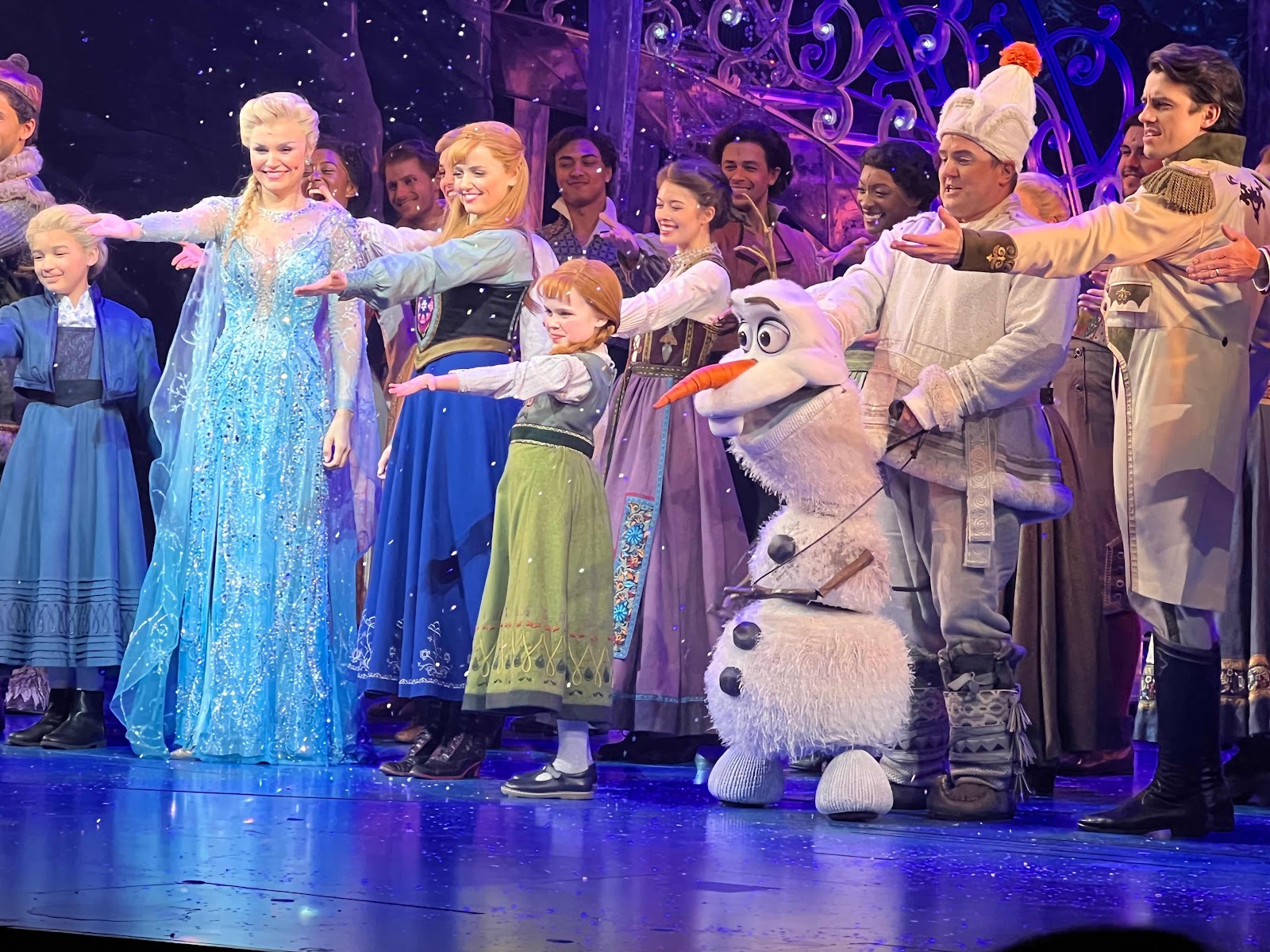