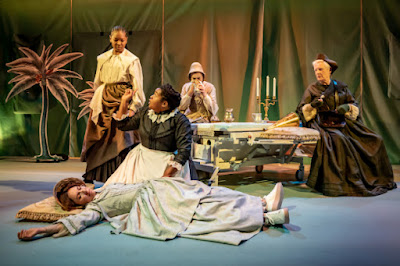 But sadly, this wasn't it - as Stuart and I discovered to our cost last Friday night at the Donmar Warehouse in London's glitzy West End.

Jackie Sibblies Drury’s new play Marys (sic) Seacole tells the story of the Crimean War nurse Jamaican-born Mary Seacole through the prism of a modern-day black nurse Mary. Both women - then and now - experience discrimination in their day to day life tending the sick. Great set up. This could be a powerful story of racism in the nursing profession and beyond.

But boy was it boring. And muddled. And disappointing.

A complete wasted opportunity. Underwritten, the actors (all female playing many parts), struggled with the script. The audience was roughly half black / white but the response was pretty universal. Each scene, be it utterly trite or desperately earnest, induced sniggers or yawns in equal measure from the audience. As Stuart said, it was like a French and Saunders pastiche of a badly staged play.

When the final line came - "We are all Mary Seacole. Marys Seacole," there was an audible sigh of relief.

No wonder they are giving away tickets. Avoid.