The Plough and the Stars... 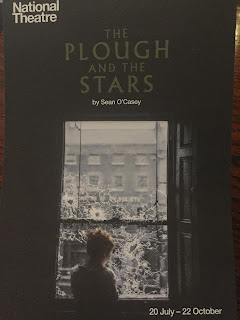 Last Thursday night Stuart and I went to see Sean O'Casey masterful pacifist drama The Plough and the Stars at the Lyttelton Theatre on London's glitzy South Bank.

Set at the times of the 1916 Easter Uprising the story tells of the residents of a Dublin tenement block; their lives, their loves and their brush with history.

The play is very funny while keeping a firm eye on the events going on just off stage. As the tension builds throughout the four acts of the piece we get transported from the domestic and social upheaval taking place one hundred years ago to the political unrest against British. Indoors the rebellion against the old rules is kicking in, outside on the street the rebellion against the old rulers is kicking off.

The play's staging was very efficient and effective giving as it did a fixed lens approach. We simply watched everyone go about their daily lives.

The acting was top notch and as the drama unfolded and tragedy struck this wizen old cynic was wiping away a few tears.