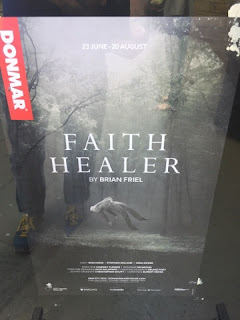 The Frank Hardy is a faith healer but with unreliable gifts. His wife Grace and manager Teddy are supportive but concerned. All Frank seems to seek is certainty - but at what cost?

Lyndsey Turner faces a production challenge here as it's a stark play for just three voices - each on stage by themselves one after the other. And not much happens; other than a lot of talking. But therein lies the point. It is only after each voice has told us a different version, a different linear dimension of the same story that we then get to see all three dimensions at once. The true story appears like a pop-up book.

Stephen Dillane as Frank, Gina McKee as Grace and Ron Cook as Teddy are all excellent; holding our attention with the confidence that comes with knowing the material is exceptional.

And how does Ms Turner meet the challenge to combat the starkness? Why a curtain of falling water encircling the stage.