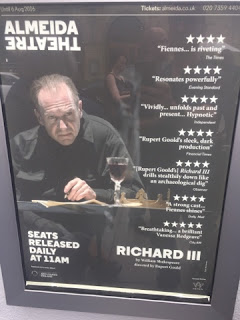 A country divided, political chaos, opportunist politicians... the play seems almost too relevant to the current machinations in Westminster.

Almeida Artistic Director Rupert Goold starts by showing us modern day Leicester as Richard III hunchback skeleton is exhumed. Next we see Ralph Fiennes's very much alive Richard III talking directly to the audience inviting us into his world. The unreliable narrator starts by telling us that even though on the face of it things are all 'glorious summer' now that his family have taken over the throne things aren't so good for him personally. He's not a very popular guy (sad face)... he has few friends (sad face)... he's not very good with the ladies (wry grin)... so he might as well be bad (big grin and wink at the audience).

This wonderful complicity is delightfully maintained throughout as our roguish anti-hero plots his way to the top. One by one those that stand between him and throne are bumped off and the skulls on the back wall increase like delightfully gruesome shining trophies. We are almost willing him on - to succeed in his dastardly plan in a manner reminiscent of the film Kind Hearts and Coronets.

Only then we, the audience, are cruelly betrayed. Richard has been wickedly deceiving us as well as them. With a vicious twist of the knife Richard finally shows us his true vile colours. First he turns brutal rapist and then brings about a double child murder. And it is a genuinely shocking moment. It is a moment both masterful and devastating. Turns out he was a wrong 'un after all and more fool us for believing otherwise.

Full marks to both Goold and Fiennes for pulling this coup de grâce off. The three hours running time simply flew by.