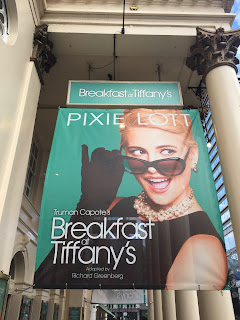 Last Friday night D, A, M and I went to see Pixie Lott in Breakfast at Tiffany's at the Theatre Royal Haymarket in London's glitzy West End.

Pixie Lott? Pixie not-a-Lott. Pixie is pleasant enough but doesn't have the charisma the part needs. The first half was rather boring but we stayed anyway. The second half picked up dramatically somewhat but not enough to save it. During the production - which was generally fairly light-footed - there were really jarring moments of gay sexual predators (WTF?) that franking left us open-mouthed. Really odd and not in keeping with the apple-pie tone of the rest of the production to be honest.

The songs were OK I suppose (esp. Moon River) but we were just left feeling a bit meh about the whole thing.

Not really recommended unless you are a really big Pixie Lott fan.
Posted by overyourhead at Thursday, July 07, 2016