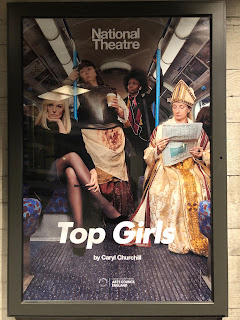 The play may be regarded as a classic of political and feminist theatre, but it seemed many people couldn't wait to leave. There are great plays about high-powered individualism and the cost of female success in a man's world, but this it appears isn't one of them.

The burb says, "Now hiring: top girls wanted for prestige positions. Must be self-motivated go-getters with an appetite for success. No timewasters."

Written and set in 1982 the play is long. Very long. And often has that annoying feature of characters interrupting each other or talking over each other so you can't follow what they are saying.

The first act was an imaginary supper party held by Marlene. Marlene is the first woman to head the Top Girls employment agency. But she has no plans to stop there. With Maggie in at Number 10 and a spirit of optimism consuming the country, Marlene knows that the future belongs to women like her.

Her dinner party guests are Isabella Bird, Pope Joan, Lady Nijo, Dull Gret, and Patient Griselda who all relate their own life story accounts as a way of externalizing Marlene’s thoughts and anxieties over her own choices that she has made in her life and the choices that she could have made instead. e.g. was it the right choice to give up her child for being successful. It was a very, very long dinner party. A bit like an extended version of Loose Women meets Horrible Histories.

In this past the two sisters are arguing over Angie and over the different paths their own lives have taken. They both made their own choices. Finally things reach a head as the quarrel becomes fiercely political. The end.

Stuart left at half time. As did much of the audience.