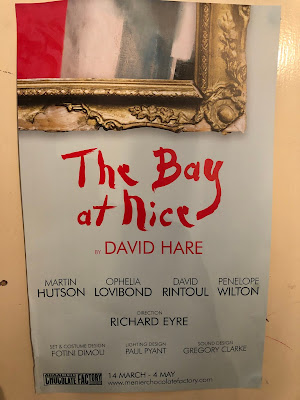 The Bay at Nice, set in Leningrad in 1956, centres round attempts to authenticate a suspect painting by Matisse. The expert, Valentina (Penelope Wilton), knew Matisse well and is well poised to judge. And judge she does - but mainly upon her 36-year-old daughter Sophia (Ophelia Lovibond) who desperately wants her mother’s approval on her upcoming divorce. Sophia is married to a high-ranking Soviet party member, but wants to start life afresh with hapless but sweet Peter (David Rintoul) who is almost twice her age.

Written in 1986, Hare’s chamber piece elegantly illustrates mother-daughter feuds, the bitter aftertaste of self-sacrifice, and the appreciation of art.

The question of the authenticity of the painting is set against the authenticity of life in the Soviet Union. However, the play has little to do with Communism versus Democracy, but rather the internal politics between a disenchanted mother and an exasperated daughter.

However, the play fails to truly shine due to the lack of drama. We don't really care about these people. Sure, there are moments of profundity in the long monologues, but this is not primo playwriting from Hare. Although it is to be applauded that the play centres on an older female protagonist, we are shortchanged by the fact that Valentina consistently gushes about the wonder of the male hero in this piece: Matisse and his brushwork.

Wilton is one of the finest British actors to grace the stage, and the play is worth experiencing for her exemplary performance alone. However, it is a shame that the story does not stand up next to this Herculean performer.
Posted by overyourhead at Tuesday, April 02, 2019