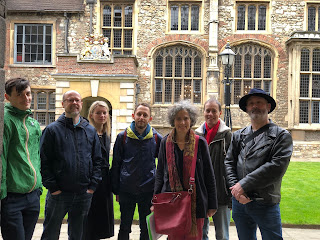 Islington has always been highly influential in the growth of the UK LGBT+ community, its organisation and rights through the 20th and 21st century. And this was the third – and probably most interesting such Pride walk we had undertaken in the area.

The walk celebrated some of the many Islington LGBT firsts – from Chris Smith, the UK’s first openly gay Member of Parliament for Islington South & Finsbury in 1984 to the UK’s first legal afterhours club Trade which opened in Clerkenwell in 1990. As well as dance, music, clubs and pubs the walk explored many of the poignant, funny and brave stories of life and activism recorded by the Islington’s Pride project.

The walk was led by the lovely Susan, a guide from Islington Guided Walks (the Mayor of Islington’s official tour guides) and had been created in partnership with and funded by Islington’s Pride. 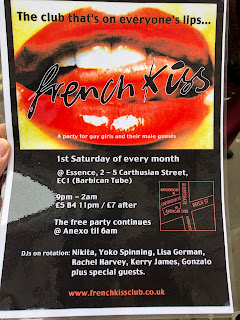 First stop was the location of "gay girl" dance venue French Kiss. Now defunct, the venue had a reputation for good facilities, reasonable prices and great dance music. It was a hard-earned reputation mind you - with the promoter saying, with some humour, "it had to good - lesbians are harder to please!"

We then moved on to Charterhouse where nonagenarian Stanley Underhill finally felt he could come out at the grand old age of 92. Stanley had lived an oppressive life of abuse and corrective therapy as documented in his autobiography "Coming Out of the Black Country". Towards the end of his book, he quotes the advice that Polonius offers to his son, Laertes, in Shakespeare s Hamlet: "above all, to thine own self be true." Brave man.

Also in Charterhouse was the Records Office where John Vassall worked. 57 years ago civil servant Vassall was sentenced to 18 years' imprisonment for espionage as a Soviet spy. Vassal claimed he had been blackmailed after in 1954, he was invited to a party in Moscow, where he was encouraged to become extremely drunk, and where he was photographed in compromising positions with several men. Gay sex spy shocker! 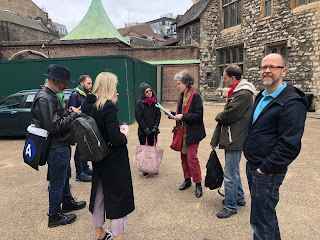 Just round the corner, we stood outside the old London Lesbian and Gay Centre at 67–69 Cowcross Street. The LLGC had hosted hundreds of events over the years. For example, in June 1985, London's Lesbian Strength march ended at the centre for the first time and a week later a special all-day event for the Lesbian and Gay Pride Parade was held. The discussion/support group 'New Beginnings' also met at 8 pm on Saturday nights at The Centre in the mid – late 1980s. This group was facilitated by a volunteer couple (John and Terry) and approximately 20 people who were in the early stages of 'coming out' attended each week. Participants would start with a discussion upstairs, and then come back downstairs for a drink at the bar.

We then moved around the corner again on to Turnmills - where Trade started life in 1990. We heard and shared(!) lots of stories of the late opening hours, the length of the queue, the door policy, ‘muscle alley’, the drugs table, and the hard house music policy. 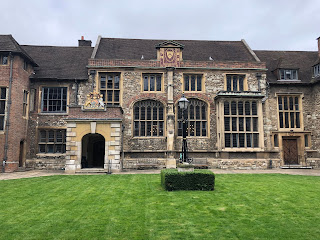 Just up the road was the bookish Free Word Centre in Farringdon Road with its wide range of LGBTQ+ written-word and live events.

Round still another corner from there was the London Metropolitan Archives. LMA is the principal local government archive repository for the Greater London area, including the City of London: it is the largest county record office in the United Kingdom and contains an LGBT history archive and hosts regular LGBT events.

We then headed up the road to Finsbury Town Hall. There we heard about Chris Smith who was the UK’s first openly gay Member of Parliament when he came out in 1984. He was the standing member for Islington South & Finsbury at the time. Later he said he was HIV positive. 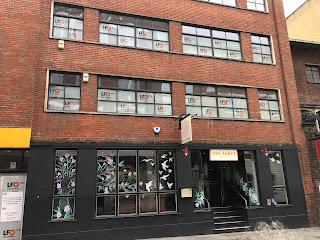 We then moved up Rosebery Avenue to the Sadler’s Wells Theatre where many notable LGBT performers have taken to the stage. Matthew Bourne has achieved international recognition from there and Benjamin Britten's Peter Grimes was first performed at Sadler's Wells in London on 7th June 1945.

Up the road still further, we stood outside the old public house Crown And Woolpack where gay girls danced the night away in the 1970s.

Across in City Road at number 378 we were told of the extraordinary life (and death) of a human rights lawyer David Burgess. Burgess co-founded the legal-aid firm Winstanley Burgess which was one of the country's most respected asylum and immigration law practices. Only Burgess had another life too. Burgess was also Sonia. Sadly Sonia died after being pushed under an eastbound Piccadilly Line train at Kings Cross station by a female companion in 2010. 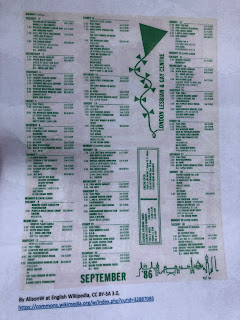 We then headed to the old Fallen Angel. A central hub of LGBT Islington social activity in the 1980s. A cafe, a bar, a vegetarian place to eat.

Like many LGBT venues The Fallen Angel had its story to tell. At one point in 1988 the managers/operators introduced a women-only night – for reasons that most thought were fairly self-evident. But this was not to be; a member or members of the gay brotherhood took the pub to court on the grounds that it was acting in a discriminatory manner. The court upheld the complaint and the pub was forced to drop the plan. Of course not all gay men were happy with the decision: some took it upon themselves to stand outside the pub on the designated women’s night and attempt to dissuade other men from going in. As to the measure of success they had, who knows. But if there were gay men who were happy to take the issue to court, there would be others who would make a point of seeking admission as a matter of some misguided principle.

The final stop on the tour was playwright Joe Orton's flat where on 9th August 1967 he was struck nine times with a hammer by his lover, Kenneth Halliwell. After killing Orton, Halliwell then took a lethal overdose of Nembutal. 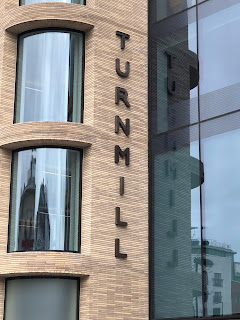 From January 1959, the pair had begun to surreptitiously remove books from several local public libraries and modify the cover art or the blurbs before returning them to the shelves. A volume of poems by John Betjeman, for example, was returned to the library with a new dustjacket featuring a photograph of a nearly naked, heavily tattooed, middle-aged man. The couple decorated their flat with many of the prints. They were eventually discovered and prosecuted in May 1962. They were found guilty on five counts of theft and malicious damage, admitted damaging more than 70 books, and were sentenced to prison for six months (released September 1962) and fined £262. The incident was reported in the Daily Mirror as "Gorilla in the Roses". 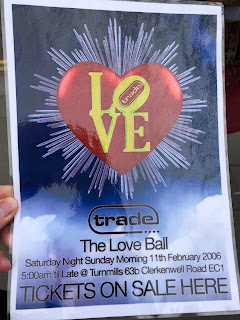 Orton and Halliwell felt that that sentence was unduly harsh "because we were queers". However, prison was a crucial formative experience for Orton; the isolation from Halliwell allowed him to break free of him creatively; and he clearly saw what he considered the corruption, priggishness, and double standards of a purportedly liberal country. As Orton put it: "It affected my attitude towards society. Before I had been vaguely conscious of something rotten somewhere, prison crystallised this. The old whore society really lifted up her skirts and the stench was pretty foul.... Being in the nick brought detachment to my writing. I wasn't involved any more. And suddenly it worked." The book covers that Orton and Halliwell vandalised have since become a valued part of the Islington Local History Centre collection. Some are exhibited in the Islington Museum.

Despite being a successful writer, Orton delighted in creating the alter ego Edna Welthorpe, an elderly theatre snob, whom he used to stir controversy over his own plays.  The wag!

So, it was a suitably satisfying end to a wonderful walking tour. Top marks to Susan and to Islington’s Pride. Informative, moving, and funny. 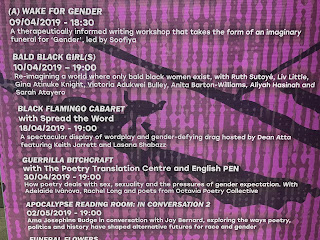 Islington’s Pride is run by Islington Heritage who have received support from the Heritage Lottery Fund to create an archive focusing on the borough’s LGBT+ heritage. Islington’s Pride will create a dedicated archive, educational resources a digital landscape as well as commission events such as this walk.

I hope there will be lasting legacy of all this sterling effort. Partially funded walks, self-guided walks, or a smart-phone app with rainbow lampposts as stopping points perhaps. 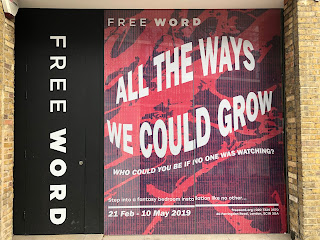 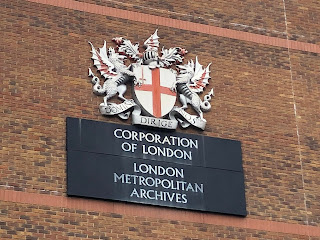 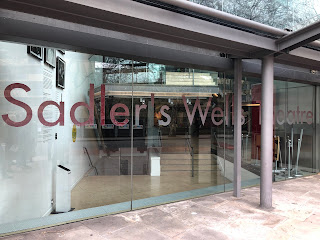 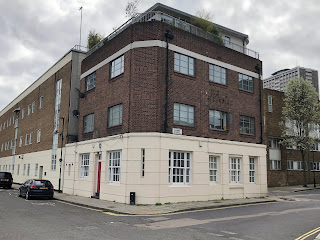 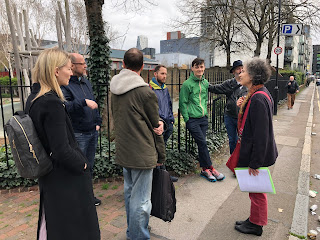 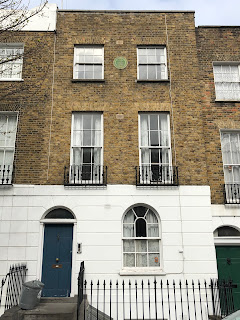