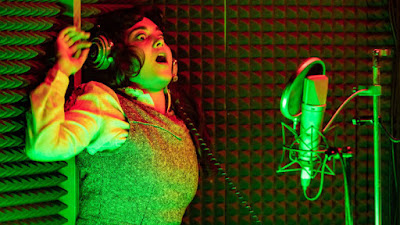 Based upon the 2012 horror film screenplay by Peter Strickland of the same name, the plot revolves around a very English sound engineer, Gilderoy, travelling to Italy to help with the sound affects - the Foley - on a giallo horror film in the 1970s.

Initially it is all crunching of leaves underfoot, stabbing of cabbages and slicing of watermelons. But as the demands of the job increased and the voice-over artists entered the mix - reality and fiction started to blur. Then things suddenly took a very dark turn indeed.

Conceived for the stage by Joel Horwood and Tom Scutt and written by Joel Horwood, it was a clever piece. Although slightly slow going at times – especially as we awaited the well-signposted climax.

Tom Brooke is excellent as Gilderoy and the rest of the cast's Italian sounds perfect - if at times unfathomable.

Weirdly some of the 'live' Foley work is actually recorded.
Posted by overyourhead at Monday, March 11, 2019