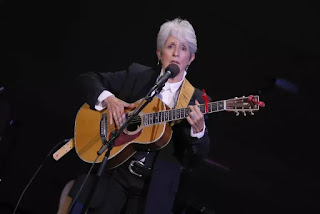 The night was as much a communal outpouring of love as it was a public performance. For, aged 78, the original protest singer's farewell performance was a night filled with much love.

It was also a night of hits and of memories. Communal sing-a-longs were frequent.

To top the final of five encores, and digging deep into her song bag, was "Dink's Song (Fare Thee Well)", not a regular in her repertoire and a number which acquired a particular poignancy here.