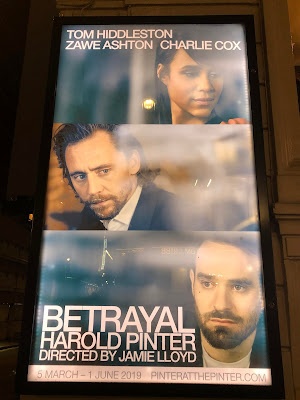 With poetic precision, rich humour and an extraordinary emotional force, Betrayal charts a compelling seven-year love-triangle, thrillingly captured in reverse chronological order. Described as the greatest, and the most moving, of all Pinter’s plays, this production marks the culmination of the Jamie Lloyd Company’s ground-breaking Pinter at the Pinter season.

Played largely as a three-hander we have Golden Globe and Olivier Award winner Tom Hiddleston (Robert) starring alongside the wonderful Zawe Ashton (Emma) and the super-sexy powerhouse actor that is Charlie Cox (Jerry).

Of the three, it is long-limbed Hiddleston that steals the show - dressed in a slim-fit suit, he’s the epitome of stiff-upper-lipped intelligentsia. When he first discovers the affair as the wronged husband, he sidelines the secret with silent, streaming tears. A stunning display of inner turmoil.

But it is an inner turmoil that has to find expression. Hiddleston's Robert is at his caustic, calculated best in the confrontation with supposed friend Jerry. "Have you read any good books lately?" He asks over lunch just days after the discovery that the affair has infact been going on for five years.

Instead of a catharsis, the exchange is a pressure chamber of politeness. Hiddleston is hilarious, making blithe remarks about the state of contemporary literature as he brutally stabs at his meal and knocks back glass after glass of Calvo Blanco, while Charlie Cox’s Jerry maintains his jovial self-denial with similar gusto.

A minimalist marble set is tinged peachy pink or flat grey depending on the lighting. Exchanges between any two characters are overlooked by the third, pacing the background. Concentric circles on the floor revolve as the phrases like 'one year earlier', 'two years earlier' are projected on stage.

Running time, 90 minutes with no interval, flies by.
Posted by overyourhead at Wednesday, March 27, 2019