The Tell-Tale Heart at National Theatre... 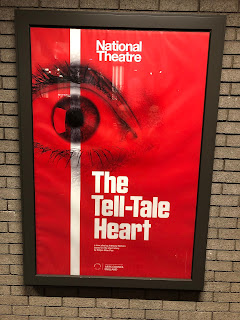 Based on the short macabre, gothic tale by Edgar Allen Poe, The Tell-Tale Heart is a twisted, graphic and darkly-comic treat.

This meta, post-modern, funny, retelling turns unreliable narrator into a playwright (Tamara Lawrance). Struggling to write a follow-up play after her debut smash hit, the writer rents a Brighton room from a landlady (Imogen Doel) in hopes of breaking through her writer’s block. When Doel’s Landlady reveals to Lawrance her hideous - and cartoonish - eye condition, Lawrance becomes haunted by the vulture-like orb that sees right through her. Interspersed are scenes with the Detective (David Carlyle) interrogating Lawrance’s writer over the whereabouts of a missing woman.

Things soon take a turn for the gory and we are soon climbing the heights of high drama. Murder, drugs, suicide, gore, and LGBT politics - it is a heady mix knowingly full of references to other gothic tales.

Most of its last half hour acts like it’s about to end and then refuses to, rebounding each time you think it might have finished with a new, madder scene. It is all feverishly enjoyable. However, an actual important final twist feels a bit tossed away, buried under an avalanche of mutant blood-red herrings. 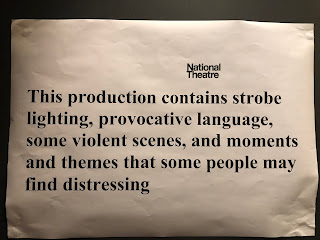 Posted by overyourhead at Thursday, December 27, 2018