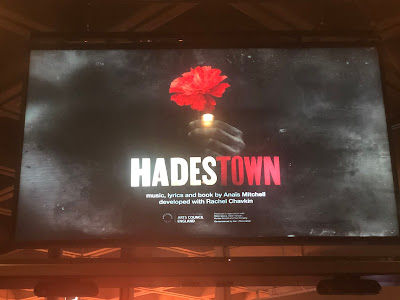 With music, lyrics and book by Anaïs Mitchell and as in the 2010 concept album, Hadestown adapts the myth of Orpheus and Eurydice to a Great Depression-era inspired post-apocalyptic setting.

The musical opens with the three Fates describing the setting, after which Hermes, the narrator, enters to introduce each of the characters. The stage empties, leaving only Orpheus and Eurydice. The two introduce themselves to each other, and Orpheus asks Eurydice to marry him. Eurydice is doubtful, since they both live in poverty and she wants a life of stability. Orpheus persuades her by telling her that his music will provide for them.

What then follows is two and half hours of trips to Hell along with visitations by the Devil, a few good song and dance numbers and a not so subtle Trump-rant against building walls.

It was OK I suppose, if you like that sort of thing, but we couldn't but help comparing it to other recent new American musicals we had seen recently - like Fun Home - that were funnier and had more memorable tunes.
Posted by overyourhead at Tuesday, December 04, 2018