The Cane - "Relevant, dangerous and exciting - it could be subtitled as Revenge of the Snowflake"; #TheCane @RoyalCourt ... 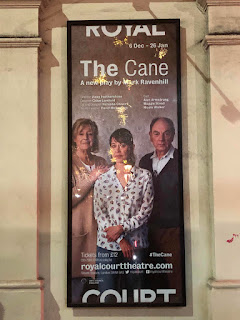 Last night Stuart and I went to see The Cane, a new play by theatrical provocateur Mark Ravenhill, at the Jedwood Theatre Downstairs, part of the Royal Court in London's glitzy Sloane Square.

The play is a disturbing debate-rousing three-hander where Anna (Nicola Walker playing brilliantly against type) is a hard-edged educationalist daughter who has come to visit her parents Edward and Maureen (played by Alun Armstrong and Maggie Steed).

There is not much love lost between Anna and her parents but as Edward is retiring from teaching after 45 years this initially seems like a simple Sunday morning well-wishing visit.

Only there is more going on than first appears. There is a riot going on outside the house. A brick has come through the window. And as Anna discovers more of her father's misdeeds does she in fact know more than she is letting on.

Relevant, dangerous and exciting it could be subtitled as 'Revenge of the Snowflake.'

We were at the first preview and the acting was fine if a little rushed. The staging seemed a little heavy-handed at times and some of the dialogue a tad repetitious. Our main issue was the basic conceit however. Is using the cane, something that was outlawed in the UK way back in 1986, really a crime? And if so can such crimes be punished retrospectively? But then again, these are perhaps the questions Mark Ravenhill wants us to think about.

Posted by overyourhead at Friday, December 07, 2018