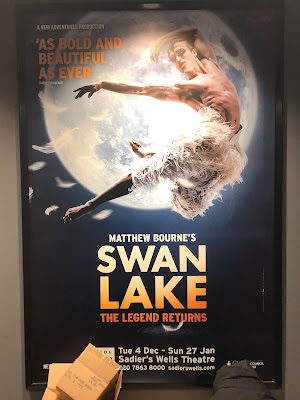 In this Swan Lake, we see the return of the show which, in 1995, changed the British dance landscape for ever. Bourne gives us a repressed and unhappy prince (Liam Mower), rejected by his icily unloving mother (Nicole Kabera), and growing up amid the stifling protocol of court. Encountering the Swan (Matthew Ball, guesting from the Royal Ballet), who may or may not be a figment of his imagination, he falls in love, only to be viciously rebuffed when the Swan’s human double materialises. The final act is shattering, a headlong plummet into tragedy.

The current production features dancers who were not born when the original was launched 23 years ago, and it’s easy to forget what a risk Bourne was taking in his homoerotic framing of the story. The 90s was a less tolerant era than our own (one newspaper captioned a picture of Bourne’s male swans with the words “Bum me up, Scotty”), and if the ballet’s dramatic momentum had faltered it would have sunk, probably taking Bourne’s career with it. But strong storytelling and a charged emotional core ensured that Swan Lake flew, and continues to fly.

Mower is an engaging and technically accomplished prince, Kabera is suitably chilling as his chic basilisk of a mother, and Katrina Lyndon is very funny as the prince’s gauche, puffball-skirted and repeatedly rejected girlfriend.

However, from the moment of his first entrance, it’s Ball’s show. As well as being an assured technician, he’s a dance actor of real charisma. As the Swan, he’s dangerous and commanding, all sinew and hissing aggression; and as the Stranger he’s as disdainful as he is sexually predatory, cutting a ruthless swath through the female courtiers before finally, to the prince’s excruciating distress, battening vampirically on to the Queen.

To ballet regulars, Ball’s performance will come as no surprise. Fast-tracked by the Royal Ballet, he has made promising inroads into roles such as Albrecht (in Giselle), Crown Prince Rudolf (in Mayerling), and Romeo. But here he really cuts loose, revelling in the physical and dramatic nuances of the role, and in the extremes of the characters he portrays. It leads one to wonder whether classical ballet, and the Royal’s increasingly abstract repertoire, is a radical enough canvas for his talents.

Bourne asks hard questions of the ballet, whose first performance in a form that we would recognise today (with choreography by Marius Petipa and Lev Ivanov) took place in St Petersburg in 1895. Why might a man imagine himself to be in love with a swan? What form would this swan take, and in what imaginative realm might such a strange love story unfold? These were the same questions that Petipa and Ivanov must have asked themselves a century earlier, but which subsequent productions have tended to avoid. Swan Lake today is all too often a beautiful ritual, all too rarely a compelling drama. Bourne’s production is not perfect. The choreography can feel repetitive, and the characterisation of the vacuous, bitchy courtiers is so unvarying that it ultimately loses its edge. But the emotional truth of the piece prevails, as it always has.
Posted by overyourhead at Monday, December 17, 2018