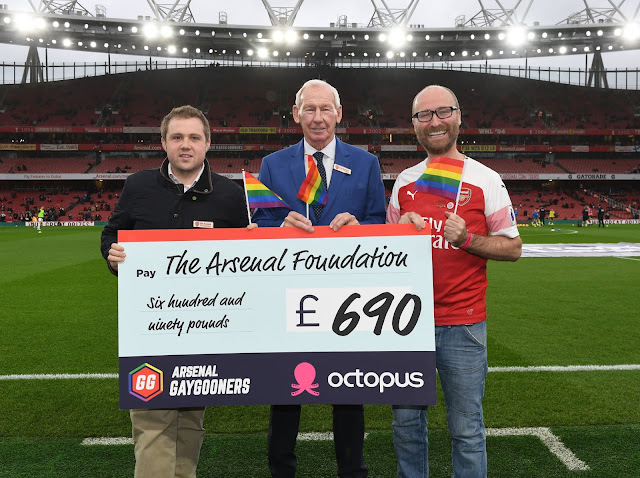 Last Saturday afternoon Arsenal’s match against Huddersfield Town was dedicated to The Arsenal Foundation, as the whole club united to give together. Octopus Energy and GayGooners had generously got involved, presenting The Arsenal Foundation with funds they raised together at Pride 2018.

At Pride, over 100 Arsenal GayGooners and Octopus Energy staff, not only marched together in the big parade on the day itself, but hosted a range of other events throughout Pride week.

Ahead of kick-off against Huddersfield, representatives from both Octopus Energy and GayGooners were pitch side with a giant cheque for The Arsenal Foundation, which was collected by Arsenal Legend Bob Wilson on the foundation’s behalf, in front of nearly 60,000 people.

A picture of the handing over of the cheque was distributed on Arsenal’s Instagram Stories twice (Saturday and Sunday), as well as going out on The Arsenal Foundation’s various social channels.

Copy of the activity also appeared in the match day programme, of which 18,000 were sold.

Great cause, well organised, and great to meet Bob.
Posted by overyourhead at Friday, December 14, 2018