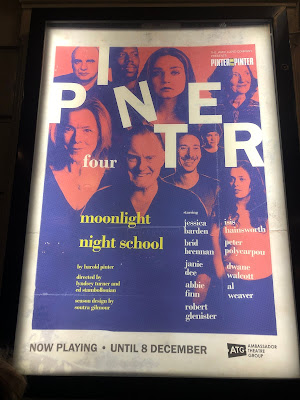 Last Friday night Stuart and I went to see the latest couple of Harold Pinter pieces at the Harold Pinter Theatre in London's glitzy West End.

Billed as part of the Pinter at the Pinter season, this night was called "Pinter Four" being the fourth collection.

In the emotionally raw and richly funny Moonlight the brutality of family life and the subjectivity of memory are explored. Directed by Olivier Award winner Lyndsey Turner, the past haunts the dark, lonely recesses of a dying father’s bedroom.

The second piece, the brilliantly witty and vivid Night School, sees an East End criminal return home from prison to find his room has been occupied by a mysterious woman with a secret. Set in the sweaty nightclubs and claustrophobic boarding houses of 1960s London, this is a rare opportunity to see this play, directed by the inventive young director, Ed Stambollouian.