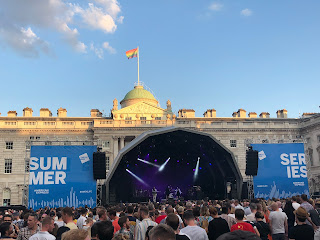 Last Sunday night Stuart and I (and the world and his husband) went to see Ms "Sing It Back" herself - Róisín Murphy at Somerset House in London's glitzy West End.

Midway through the video that accompanies her recent track "Plaything," the A-side of Róisín Murphy's latest EP, an interior drama plays out on a dance floor. As she's led by a friend to take a breather, she sings, "I know I mean nothing to you." She's flagging, and seemingly despondent. (At this point, you can only hear claps and soft, curling synth tones.) Once the kicks and keys return — the song is produced by Maurice Fulton, and that trademark disco funk is unmistakably his — Murphy psyches herself up to go again. "Just taking me / with a pinch of salt," she sings, visibly re-energised, "Breaking me / Don't give a thought! / Shaking me / To the very core / Play with me / Till you get bored." The track's garage shuffle kicks back in, and suddenly she's back on the dance floor, doing high leg kicks. 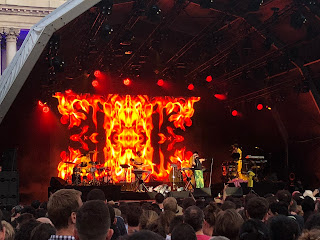 The clip, which Murphy directed, tells a familiar story of a dip on a night out, but it possibly nods to a broader theme. In an interview a few years ago, the Irish artist recalled the barriers she faced under a more intense spotlight, when she'd made her 2007 album, Overpowered, on EMI. "[The title track] was given to [BBC] Radio 1 way up front, and we were told that the guy who runs Radio 1's wife just loves this record," she said. "It was like, 'We've been on holiday with it and we love this record, we've been listening to it and listening to it and listening to it... we're not going to play it though.'" That frustration surfaced again a few days ago in a string of tweets. "I feel like I'm banging my head against the wall," she wrote in one. "I make good and surprising records... But I get indifference in the industry."

And so it was last night. The set was indeed “good and surprising”. But there was a slight whiff of indifference in the air. 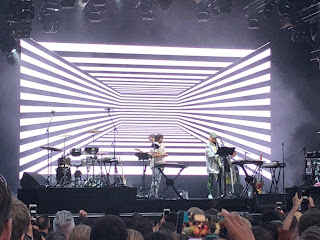 Sure, the courtyard of Somerset House was packed with a dedicated crowd jumping up and down to most of the wonderfully (mainly strange and hypnotic) music that Róisín Murphy produced and yet... and yet... it was all just too tantalisingly uncompromising. Just when you heard part of a song and think, "oh I love this bit - the song should do more of that and go this way more..." it didn’t. Just when you love that disco funk riff in say "Ten Miles High" you get a sudden ending or comparative swerve in a dud like "Demon Lover" or "Exploitation". The melodic highs are amazing - enough to make you want to dance like a crazy animal - but the lows are just a bit drab. As I say of my beloved Arsenal, "it’s the inconsistency that kills." That said, "Plaything" was indeed genius as was the aforementioned "Ten Miles High".

We love Róisín Murphy. We really do. But like so many artists (Marc Almond comes to mind) on some nights - on some hot Sunday nights - you just want to hear the hits... played properly... and sing. Sing it back.