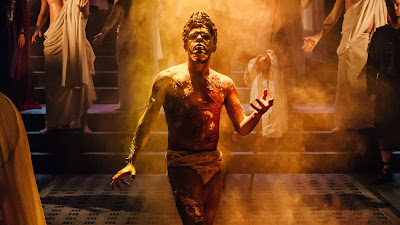 This part was shorter than the first, but at just over three hours, still long. Very long. But we loved it - probably even more than part I.

In summary: with Caesar out of the way Cicero, rather like many an aging politician, tried to outwit the new order - the political upstarts. But in their own ways both the headstrong Mark Antony and wily, young Octavian out-foxed our hero with their own mixtures of flattery, guile and sheer brute force.

Again the whole cast were again excellent and we hung on their every word.
Posted by overyourhead at Monday, July 23, 2018