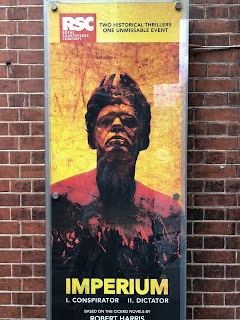 Last night Stuart and I went to see the first part of a lengthy adaptation of Richard Harris's three epic Cicero biographies Imperium I: Conspirator at the Gielgud Theatre in London's glitzy West End.

At three and half hours it was long. Very long. But very good. Rather like I, Claudius meets Yes, Minster meets The West Wing meets House of Cards meets Carry on Cleo. Yes, that good.

Politicking, philosophising, high intrigue, loose morals, much fourth-wall breaking, the odd decapitation, the odd heaving bosom, and the odd six-pack. Something for everyone really.

The cast we excellent and kept the action flowing pretty well. Parallels with the current politicians were sign-posted too.

Tonight we are seeing the second half. Another three and half hours. Let's hope we get to hear those immortal words... infamy, infamy, they're all got it in for me!
Posted by overyourhead at Friday, July 20, 2018