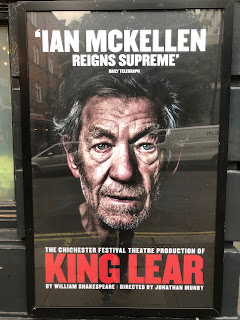 Starring Ian McKellen in one of Shakespeare’s greatest roles his daft old King Lear was a marvel. Simply outstanding. In fact, this was a production that seemed to sing – from hitting the high notes of the merry royal court to whistling an evil tune behind the throne.
The pseudo-modern dress was certainly no distraction, the thrust staging worked a treat, and the lighting, the sound and the copious Kensington gore married the violent action perfectly.

All three of Lear's daughters were brilliantly realised. I've rarely seen Goneril (Claire Price) and Regan (Kirsty Bushell) played so well – all scheming, bitchy, pouty and self-obsessed these women weren’t going to let anything get in their way.

Luke Thompson's Edgar was a sensation too. Almost naked for much of the production the intensity with which he crackled on stage was electric. It was an earnest, occasionally homoerotic, and physical performance that was as akin to mime as it was to the Bard's great words. Action happily married to poetry. A true feat.

For me though, the night went to James Corrigan who's dark-breaded Edmund was simply astonishing. Beguiling, evil, sexy, and funny we were entranced from the get-go. Played as richly as Ralph Fiennes's recent villainous Richard III we were rooting for him from the start in spite (and perhaps despite) of his nefarious intent. A wicked role played quite, quite wickedly. No one writes a villain quite like Shakespeare and Thompson nailed it.

Taken as a whole this was a far superior production to either Sam Mendes' recent rather strained production at the National starring Simon Russell Beale or the over-lauded Glenda Jackson performance at the Old Vic a couple of years back. No, this production gets it just right. And if this indeed is going to be McKellen's last great Shakespearean stage role then it is a must-see performance for any fan of this galactic actor and the stars that orbit him.

Run for a ticket.

Posted by overyourhead at Wednesday, July 18, 2018