Titus Andronicus @BarbicanTheatre Yes, my friends, it is a blood bath of murder, rape, mutilation, and revenge. And it is bloody good! ... 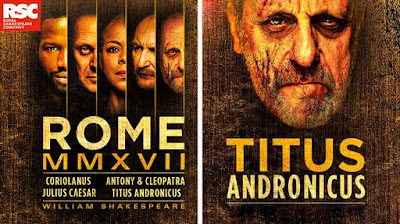 Warning (says the sign outside): "This production contains smoke effects, gunshots and sexual content. There are violent scenes throughout that some audience members may find distressing." Yup.

After the chaos and disorder of recent years Blanche McIntyre has directed this epic conclusion of the Rome Season as a chillingly contemporary take on Shakespeare’s gory revenge play. The modern setting is both credible and resonant.

Titus Andronicus contains 14 direct killings (9 of them on stage), 6 severed members (hands, heads and privates), 1 rape (or 2 or 3, depending on how you count), 1 live burial, 1 case of insanity, and 1 of cannibalism - an average of 5.2 atrocities per act, or one for every 97 lines of the play. Yes, my friends, it’s a blood bath of murder, rape, mutilation, and revenge. And its bloody good!

The night goes to David Troughton's Titus though who is in turns savage, proud, cruel, crazy, and profound. His Titus plays as a leader exhausted by war and loss, but whose outrage at the murder, rape, and severed body parts he sees drives him to unspeakable acts of revenge.

Synopsis (i.e. **Spoilers**)
Titus Andronicus, Roman general, returns from ten years of war with only four out of twenty-five sons left. He has captured Tamora, Queen of the Goths, her three sons, and Aaron the Moor. In obedience to Roman rituals, he sacrifices her eldest son to his own dead sons, which earns him Tamora's unending hatred and her promise of revenge. Titus and his brother Marcus are oblivious to this and feel justice has been served.

Tamora is made Empress by the new emperor Saturninus. To get back at Titus, she schemes with her lover Aaron to have Titus's two sons framed for the murder of Bassianus, the emperor's brother. She also urges her sons Chiron and Demetrius to rape Titus's daughter Lavinia, after which they cut off her hands and tongue so she cannot give their crimes away. Titus is tricked into cutting off his own hand as a bargaining chip to free his two sons they are beheaded anyway. Finally, even Titus's last surviving son Lucius is banished from Rome; he subsequently seeks alliance with the enemy Goths in order to attack Rome. Each new misfortune hits the aged, tired Titus with heavier impact. Eventually, he begins to act oddly and everyone assumes that he is crazy.

Tamora tries to capitalize on his seeming madness by pretending to be the figure of Revenge, come to offer him justice if Titus will only convince Lucius to cease attacking Rome. Titus, having feigned his madness all along, tricks her, captures her sons, kills them, and makes a pie out of them. He feeds this pie to their mother in the final scene, after which he kills both Tamora and Lavinia, his own daughter. A rash of killings ensue - pretty much everyone either shoots or staps everybody else; the only people left alive are Marcus, Lucius, Young Lucius, and Aaron. Lucius has the unrepentant Aaron buried alive, and Tamora's corpse thrown to the beasts. He becomes the new emperor of Rome.

Posted by overyourhead at Friday, January 19, 2018