Julius Caesar @_bridgetheatre What a mess! A beautiful play and top-notch cast ruinously distracted by an OTT, everything-but-the-kitchen-sink production. "It's not too gimmicky is it? The tandem?"... 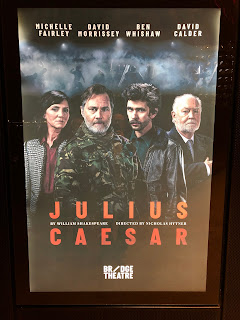 Last night Stuart and I went to see Julius Caesar at the Bridge Theatre in London's glitzy London Bridge Quarter.

Ben Whishaw and Michelle Fairley are great as Brutus and Cassius, David Calder is super playing Caesar and David Morrissey admirable as Mark Antony. But super-star director Nicholas Hytner and production designer Bunny Christie have really dropped the ball on this one.

The cast seemed to be in pitch battle with the set and the 400 people odd in the pit with them. To say that the set was a distraction would be utterly underplaying the annoyance we felt as we struggled to hear Shakespeare's beautiful words or see the action.

The constant rising and falling of the scenery, the crashes, the bangs, the live rock band, the flashing lights, the balloons, the leaflets, the rubble falling from the gods, the blaring music, the smoke, the jeep, the audience being constantly pushed around, the gun shots, the cheap suits, the relentless two hour running time, the stagehands shouting "move!" to the audience in the way of the constantly moving set... Everything was a distraction. 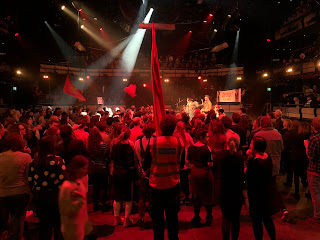 It is frankly impossible to suspend your disbelief while you are watching a play when you are constantly being dragged back into the present moment and reminded you are in a theatre.

It reminded me of the Victoria Wood written sketch with the ridiculous play producer asking of her over-blown production of Hamlet, "It's not too gimmicky is it? The tandem?"

Phyllida Lloyd's all-female Julius Caesar was both braver and better with just two chairs and a cloak.

Posted by overyourhead at Friday, January 26, 2018