Star Wars: The Last Jedi (Short review: I loved it)... 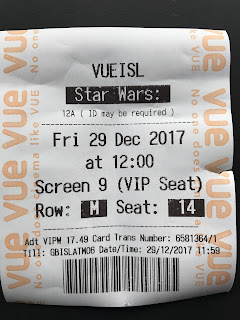 Short review: I loved it.

I can’t help but think that a large part of the whole experience of ‘liking’ or ‘not liking’ a film is not only whether it is objectively ‘any good’ or not (although that is pretty damned important!) but also what your expectation is when you enter the auditorium.

So, it was interesting that pretty much all the paper reviews for The Last Jedi across the board were 5 star ones. Were we being set up for a big disappointment?

And then the initial fans got to watch it. Those people who booked ahead. Long before any reviews had come out. And I think it’s fair to say it divided opinion. Some said they hated it. Well, many did in fact. Either hated it or found it boring. It currently has one of the lowest fan ratings of any Star Wars film including (yes, including) The Phantom Menace! So is that the disappointment talking? Were their expectations too high?

I went to go and see it today. And my expectations were pretty low. I’d seen what the fans were saying. I was ‘expecting’ a dog of a film.

And surprise, surprise… I loved it.

But these bad points were completely overwhelmed by the good points.

There was lots and lots of action, some cool special effects, and I especially loved the scene on the salt flats (filmed in the Bolivian Desert near where we were last week) and all that red dust.

I loved the episodic nature of the piece, there were some great twists, Laura Dern was amazing, and there was genuine tension as to whether characters would die or not. We have Rogue to thank for that I guess.

I loved the new comedy creatures (Porgs?), Daisy and Adam were simply brilliant, and I simply wanted it to go on and on.

So have you seen it? If not, have I modified your expectation? Will you now hate it? Or just find it boring? Let me know.

Posted by overyourhead at Thursday, January 04, 2018