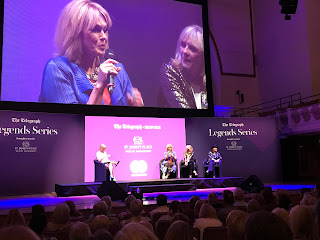 Last night Darren, Stuart and I went to see Joanna Lumley, Twiggy, and Lulu be interviewed by Jo Whiley as part of The Telegraph Legends Series Presents 60s icons at the
Cadogan Hall in London's glitzy Sloane Square.

The first half consisted of a broad interview - how did you get into the business, what's your favourite record, who's the most famous person you've ever met - all very soft questions, so far, so Smash Hits!

Then after the break Lulu "treated us" to a three songs followed by everyone back on stage for a Q&A from the audience.

So what did we learn from the evening?

Well, Lulu really is not very likeable. Great voice but self-centred, self-absorbed, and self-important. She implied she shagged David Bowie but could not remember the details. She hated Elvis - "he tried to copy black singers" apparently - which is a bit rich coming from her. She started every sentence with the word "I". You know the type.

Twiggy is a lovely. Modest ("but then she has much to be modest about." Ha ha), engaging, and slightly in awe of her own success. She told us stories of her humble beginnings, her discovery and her time in New York. They are trying to get a musical of her early live off the ground but it is stranded in development hell apparently.

Joanna Lumley is simply wonderful. But then we knew that, right? She is funny, self-deprecating, self-aware, well-read, well-traveled, and unlike Lulu and Twiggy whose gifts were bestowed upon them Ms Lumley has earned her good fortune the hard way. She told us lovely stories of going to see Dirk Bogarde in the cinema and being petrified with admiration. She found it hard to break into acting as models were never taken seriously, told a very funny story of meeting grandmothers in the jungle, and promised a return to Coronation Street as Elaine Perkins so resume her liaison with Ken Barlow should her schedule allow.

So a great night out. Three old queens seeing three more famous and even older queens.