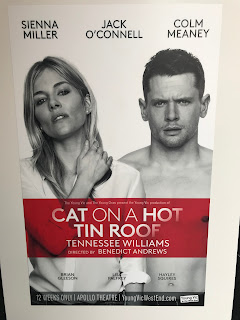 Warning: There was nudity from the outset. It was sustained. It was frequent. And it was full-frontal. (And we loved it.)

In fact this was an extremely explicit production both on the stage and from the page. For this was no watered-down Hollywood version - instead it uses, quite rightly, the original stage manuscript. The gay storyline was not told using undertones or implied behaviour - this production called it out - it was in your face queer writing as its best. And it was heart-breaking. The eventual showdown between tortured Brick and Big Daddy had me weeping.

The acting was good - actually, I'm doing it a bit of a disservice - the acting was great. Sure, the accents sometime wandered transatlantically from Mississippi to Derby but Sienna Miller's Maggie was gloriously feline, Jack O'Connell's alcoholic Brick was honest and raw, Colm Meaney's Big Daddy was a triumph, and Lisa Palfrey's Big Momma a masterclass.

However, special mention must go to Hayley Squires's Mae who managed to be funny, spiteful and more than match for Maggie the cat.

If you like nudity, great acting and a heart-wrenching story. This is the production for you.
Posted by overyourhead at Tuesday, July 18, 2017