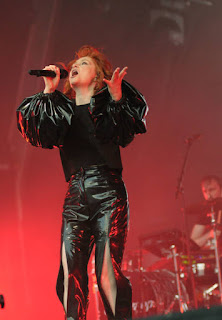 Last Sunday night to cap off an amazing Pride weekend Stuart, Joanna, Simon, me and the world and his husband went to see the fantastic Goldfrapp perform at Somerset House in London's glitzy Aldwych.

Ostensibly, to promote new album Silver Eye - from which they played six tracks - the gig started with two of their classics: Utopia and Lovely Head.

Dressed in black Alison strutted on to the stage. She was not as shy, enigmatic or awkward as we have seen her in the past and actually engaging a little with the audience which was nice. Her amazing performance did all the talking necessary though. Once the gig got going Alison stalked the stage like.. a giant stalking thing. At its height she was jumping, marching, whirling, lunching and flapping her arms like... a giant flapping thing. A Goldflapping thing. It was performance that we rarely see. And it was fantastic.

The staging was set to full on festival mode - bright lights, blaring sound and fabulous back projection.

Goldfrapp seem to have three main types of songs. The first being dreamy, floaty music that wafts across the listener as the remarkable instrument that is Alison's voice weaves in and out of the lush musical textures. The second is crashing, thrashing, smashing discord that more often than not sends Alison's voice from a base distorted screech soaring up to the high-pitched wail of a siren beckoning you to a fate few could resist and few could survive. The third is their disco stompers that get everyone on their feet dancing. It's music that demands to be listened to not just heard. And we were treated to ample amounts of all three types.

A quieter song like Ocean would start with Alison's haunting voice - chilling, soaring, mesmerising - and the audience would start to sway and yet few of them seemed to realise they were doing it. Heads would bob and shoulders would shake like puppets on strings under Goldfrapp's control. The overpowering force of what we were hearing had captured them and it had left them utterly spellbound. This entrapment was a joyous thing though judging by the smiles that had spread across every face. The silence of the crowd until the last note of their magnificent quieter songs was in stark counterpoint to the rapturous applause that was to follow.

And then the thrash of Ooh La La or Strict Machine would kick in or the powerful disco rhythm of a song like Number 1 and everyone would go bat-shit crazy dancing in a frenzy like lunatics under a full moon.

A was a fantastic gig.

As we left I heard one guy remark, "Boy, can she sing! Not songs, mind you!" and that is indeed the delightful oxymoron that is Goldfrapp. Music but not as we know it.

For ninety glorious minutes we were in Goldfrapp's world.

Bitchy side note "The Goldfrapp Scale": It's hard being a woman in the music business. Keep quiet and you get walked on, speak your mind and you're a bitch. Still, sound and lighting technicians in the Bristol area use one woman as a reference point for all others. When faced with a new artist they ask: “How difficult to work with is she on a scale from 0 to Goldfrapp?” Ouch!