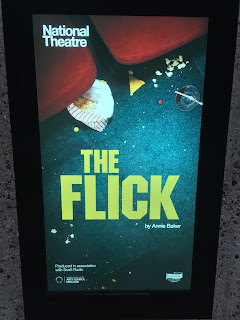 Last Friday night Stuart and I went to see Annie Baker's The Flick at the Dorfman Theatre on London's glitzy South Bank.

The play was set in a small American cinema auditorium and told the story of three bored and boring ushers.

They go about their daily lives as very little changes. Digital projection is coming... there might be a new owner soon... they don't get paid much so they fiddle some 'dinner money' from the till...

It was all rather Pinteresque - but not the good Pinter, the bad Pinter. We suffered three and half hours of these mundane lives, these mundane conversations and... the... very... long......... mundane... pauses. It relies heavily on the now standard theatrical trope of having your characters waiting for something. And as they wait through their inane chatter they gradually reveal some truth about their lives or their situation. Only here we learn very little and care even less.