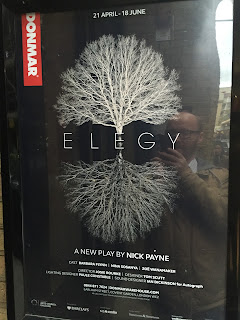 Last night Stuart and I went to see Elegy at the Donmar Warehouse in London's glitzy West End.

Written by Nick Payne, whose previous play Constellations was a box office smash, this work was rather more pensive - rather less interesting - and mercifully very short.

Starring Zoë Wanamaker it tells the medical story of how a woman with a progressive brain disease opts to have her malady cured but at the expense of 20-30 years’ worth of recent memories. This changes who she is and effectively ends the marriage to her wife played by Barbara Flynn.

Think a lesbian version of Eternal Sunshine of the Spotless Mind but not quite as good.

The play is told in reverse which was to begin with a little confusing but ultimately did allow us to arrive at the situation where the couple are initially considering the treatment and what long term affects it will have on their relationship.

I almost expected to hear Sting singing If You Love Someone Set Them Free. But there was no music in this production. And precious little engagement with the emotions of the characters to be honest. You could see they were upset as the acting was superb but you didn't really feel for them. The dialog was all a little under-written and repetitive at times. In fact the opening scene is repeated verbatim at the end a little pointlessly. Yes, we get it. We were here the first time remember?

A shame really as all the elements were all there - a great playwright, a great cast and a great venue. Just not a great play.

Oh and the doctor is played by Nina Sosanya - so there were three Doctor Who actresses in one show! Which for me made a rather disappointing night a bit more fun.
Posted by overyourhead at Friday, April 29, 2016