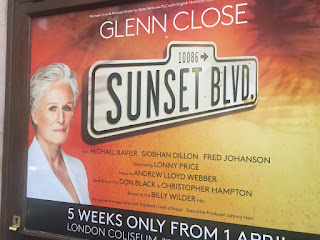 Last Thursday night Stuart and I went to see the wonderful Glenn Close in Sunset Boulevard at the London Coliseum in London's glitzy West End.

Sunset Boulevard is a musical with book and lyrics by Don Black and Christopher Hampton and music by Andrew Lloyd Webber. Based on the 1950 Sunset Boulevard film, the plot revolves around Norma Desmond, a faded star of the silent screen era, living in the past in her decaying mansion on the fabled Los Angeles street. When young screenwriter Joe Gillis accidentally crosses her path, she sees in him an opportunity to make her comeback to the big screen. Romance and tragedy follow.

Ok Ms Close may not quite have the voice that equals the best of them but she sure makes the role her own. Her Norma Desmond is just wonderful. She simply outshines the rest of the cast. You just can't take your eyes off her. Even if Stuart did say she's been made up like Regina Fong!

Ultimately the only mild disappointment is that the musical itself hasn't really held up as well as I'd hoped it would have. Perhaps Lloyd Webber has been rather cruelly exposed by his flop Stephen Ward recently and it will take something special to recover from that particular disaster.

My only other minor quibble is that the semi-staging doesn't really do justice to the star that we have all come to see and adore. Ms Close perhaps deserves a little better for her London debut. And being in such a large venue as the Coliseum we never really get to enjoy the final line as much as might... the final single spotlight on her face... as she says the immortal...  "All right, Mr. DeMille, I'm ready for my close-up."