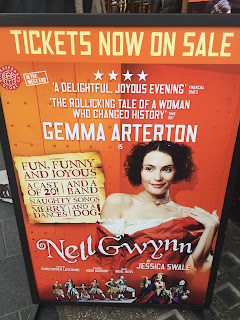 Last night Stuart and I went to see the Shakespeare's Globe transfer of Nell Gwynn at the Apollo Theatre in London's glitzy West End.

Written by Jessica Swale and starring Gemma Arterton the play is a witty telling of the story of the coquettish Gwynn who was to become not only the mistress of Charles II, mother of two of his children but also instrumental in changing the theatre of the 17th century. It cleverly weaves in the vital story of how the term actress was born when Charles II grants permission for women to act. Women playing female roles. Fancy!

The play is a riot from start to finish. Funny, bawdy and very knowing it plays to the crowd like a first class pantomime, a top-notch Carry On film and one of the better Shakespearean comedies all rolled into one.

If you get a chance to see it, do. It's great fun - not least to see little Milly, who almost steals the show as a cute King Charles spaniel called Oliver Cromwell.
Posted by overyourhead at Friday, April 15, 2016