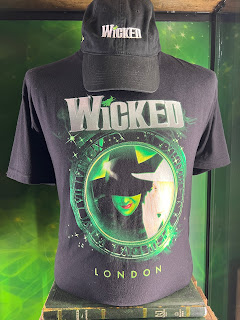 Yesterday afternoon I went to go and see long-running musical Wicked again at the Apollo Theatre in London's glitzy Victoria.

Stu and I had seen Wicked way back in 2006 and we didn't really rate it. But I thought I'd give it another chance. Besides, the tickets were seat-filling freebies. I didn't have bothered though; still pretty lame. I almost nodded off twice.

For those who may not know, it's the back story of The Wicked Witch of the West from the The Wizard of Oz. Only here she's simply misunderstood here.

Well, the plot's all over the place and the songs are under-powered and forgettable. The dancing is dated and if only the performance had been as tight as the male lead’s trousers...

It's all too typical of the modern Broadway musical: efficient, knowing and highly professional but more like a piece of industrial product than something that genuinely touches the heart or mind Well-meaning but also melodramatic, incoherent and dreadfully superficial. A bit of a mess.

At one point in the show the male hero holds the good witch Glinda at gunpoint. A little lad in front of us shouted out, "shoot her!" Everyone's a critic!
Posted by overyourhead at Thursday, January 13, 2022