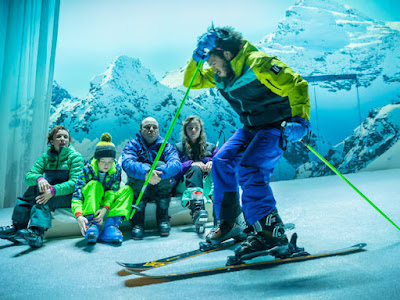 Last Friday night Stuart and I went to see Force Majeure at the Donmar Warehouse in London's glitzy West End.

Based upon the infuriatingly divisive 2014 film, Force Majeure tells the story of a Swedish family who travel to the French Alps to enjoy a few days of skiing. The sun is shining and the slopes are spectacular but, during a lunch at a mountainside restaurant, an avalanche turns everything upside down. With diners fleeing in all directions, mother Ebba (the wonderfully tightly wound Lyndsey Marshal) calls for her husband Tomas (the distracted Rory Kinnear) as she tries to protect their two children (Florence Hunt, a mardy teen and Henry Hunt, at the cute but irritating stage - both excellent). Tomas, meanwhile, is running for his life... The anticipated disaster failed to occur, and yet the family's world has been shaken to its core, a question mark hanging over their father in particular. Why did he run and not protect his family? Tomas and Ebba's marriage now hangs in the balance as Tomas struggles desperately to reclaim his role as family patriarch.

Director Michael Longhurst and designer Jon Bausor, have done a fine job in solving the not inconsiderable problems of bringing a film set on a large mountain and in a gigantic hotel to a small stage. The Donmar has be converted into small but perfectly formed ski slope! Which adds much to the intensity of the central relationship, now hemmed into a space as small physically as it is psychologically.

A great show.
Posted by overyourhead at Monday, January 17, 2022