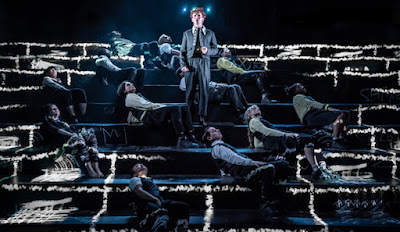 Last night I went to see Spring Awakening at the Almeida Theatre in London's glitzy Islington.

It is perhaps a tad audacious of Rupert Goold to stage such a flamboyantly morose alt-rock musical about teenage repression, angst, rebellion and suicide at a time when most people want to just be cheered up. But here we all are watching a tidal wave of surging adolescent hormones breaking against a stony wall of adult repression in the musical that is Spring Awakening.

It's a surprisingly faithful adaptation too - based as it is upon the 1891 tragedy by the German playwright Frank Wedekind. Perhaps a little too faithful for my taste.

The dated ideas; for the focal pupils, it’s a time when school grades are a matter of life and death; when losing your virginity is your own personal Mount Everest; when sex is a fantasy involving your teacher; and when lying side-by-side, hands touching, on frigid nights is enough to be mistaken for true love.

Goold has missed a trick in not updating the setting. There is plenty of modern day rebillion to call upon.

With the exception of the song "Totally Fucked" - with its 'Save The NHS' and 'Black Lives Matter' slogans projected onto the otherwise black steps that make up the stage - there is precious little to indicate any modernity.

And given you've decided to put the musical on at all it seems odd to then shy away from some of the important and shocking aspects. The botched abortion scene, in particular, is skimmed over so ambiguously it makes it impossible to feel any emotion other than bafflement during the subsequent graveyard scene.

Full marks to the cast though. There are usually 7 boys and 6 girls but last night three of the girls were struck down with Covid. One understudy helped out but they were still two leads down. They soldiered on though and we all made it through to The Song of Purple Summer finale.

A good night out but I would have liked more bite and more modernity to really shake the show awake.
Posted by overyourhead at Friday, January 28, 2022