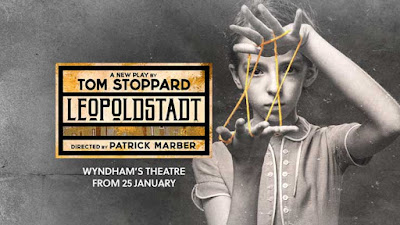 It's funny, heart-breaking, humane, and important. We loved it.

At the turn of the twentieth century, Vienna was the liveliest metropolis in all of Europe, buzzing with intellectual activity, artistic talent, and living life to the fullest. Ten per cent of the population was Jewish and just a generation before them, Emperor Franz Josef granted Hews full civil rights. As such, thousands upon thousands had fled from the Pale of Settlement in Imperial Russia and from the pogrom riots, finding sanctuary in the crowded slum dwellings of the Jewish Ghetto known as Leopoldstadt.

Taking its name from the old Viennese Jewish district, Tom Stoppard's Leopoldstadt play tells the intimate tale of a Jewish family that has done well for themselves. "My grandfather used to wear a caftan," says factory owner Hermann, "My father would wear a top hat to the opera, and I would have the singers over for dinner."

However, as we all know, this beautiful life would not last. Less than half a century later, this family and millions of other Jewish families would find out first-hand what it really meant to be Jewish in the 20th century.

Leopoldstadt is probably one of Stoppard's most heart-wrenching plays. It explores the human condition as it blurs the lines between family, love, passion and perseverance. Director Patrick Marber brings it all vividly to life.

Widely regarded as an impersonal writer, Tom Stoppard (81) rarely delves into his own life, but this marks an unprecedented change in the playwright's oeuvre. Born in 1937 and raised in a Jewish family, all of Stoppard's grandparents and many of his family members from his parents' generation perished during the Holocaust. The play is then very personal and dear to Stoppard's heart, which is why the play not only took an entire year to write but also a long time to develop. Stoppard, who admitted to getting most of his ideas for plays from London's Harrods department store, decided to avoid an outright autobiography with Leopoldstadt, instead opting to write about a Viennese family rather than a Czech, thus maintaining at least some level of impersonalism.

But impersonalism is a hard act to maintain; especially with such evocative material. During rehearsals Marber "instituted a fabulous regime of lectures" given by cast members, allotting each a subject relevant to the play's themes to investigate. The second preview performance, on Monday 27 January 2020, was on Holocaust Memorial Day and the audience were given a memorial candle as they left the theatre.

The production's set design is by Richard Hudson, costumes by Brigitte Reiffenstuel, lighting by Neil Austin, sound, original music by Adam Cork and movement by EJ Boyle. The 41 actors performing were cast by Amy Ball (adults) and Verity Naughton (children).

Leopoldstadt is a passionate drama of love, family and endurance. It is undoubtedly Stoppard’s most humane and heart-breaking play.
Posted by overyourhead at Friday, January 31, 2020