Amélie the Musical @ The Other Place... 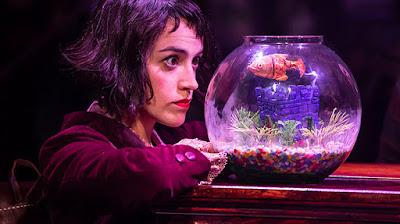 Last Thursday night Stuart and I went to see Amélie the Musical at The Other Place in London's glitzy Victoria.

This musical version of the beloved bitter-sweet French 2001 rom-com isn't exactly profound, but it is a bit of escapism, albeit one that is let down a little by the main lead.

When the show first launched itself in New York a few years back 'Amélie the Musical' got accused of being too sweet and too insipid. So now Michael Fentiman’s revival has tried to redress that balance by injecting some more viniagre into the production. With some success.

Audrey Brisson takes on the title role as Amélie but I have to say her rather shrill voice does rather pierce the show's more floaty love songs. The cast are all very able actor-musicians who fiddle and stomp their way through many other ballads - but sadly these could easily be forgotten.

Maybe the problem is in the writing, rather than the songs - we get to see this young woman's strange and wonderful world, while not really knowing that it is she thinks or feels about it.

Craig Lucas's book tells us about Amélie's tragic younger life: an over-protective father; a mother with a bizarre ability to be in the wrong place at the wrong time; but we don’t really get to see Brisson break out of this initial parental mismanagement until the musical’s final few moments.

In the film Audrey Tautou was gorgeous and her magnetic central performance largely carried the movie - jumping effortlessly over any occasional plot holes. Here however, Brisson ‘s Amélie travels a less central emotional journey, so when we do come across the odd confusing moment in the narrative we are left feeling a tad less served - adept though she is at leaping (with her excellent circus skills.)

'Amélie' is perhaps best when it’s slightly sending up itself up, like when Amélie's Princess Diana fixation causes her to imagine her own funeral but with her name spelled out in white flowers instead of Diana's and a stomping piano number by Caolan McCarthy, brilliantly impersonating Elton John.

I should note that Madeleine Girling's Parisian set is great as is the hilarious garden gnome puppet Dik Downey.

A brave attempt that needed slightly better songs and a more charismatic lead. With a few rewrites and fresh cast and 'Amélie the Musical' could be a great show.
Posted by overyourhead at Wednesday, January 15, 2020