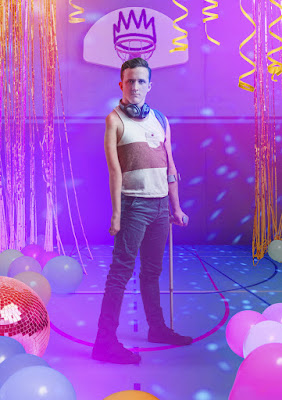 Last night Stuart and I went to see Teenage Dick at the Donmar Warehouse in London's glitzy West End.

Written by the American playwright Mike Lew, Teenage Dick falls very much in the tradition of Hollywood films such as ‘Ten Things I Hate About You’, using a Shakespeare play as the basis of a high school plot.

Here the play’s ‘Dick’ is Richard III and the story centres on the machinations of renamed, young Richard Gloucester, disabled and unpopular, to become senior class president in the elections at Roseland Junior High. Although Lew turns the idea in unexpected directions – his Richard is nowhere near as straightforwardly dastardly as Shakespeare's.

Also Lew insists that two disabled actors are cast in the central roles of Richard and his side kick ‘Buck' Buckingham. For this London production, he has adapted the text for the Australian actor Daniel Monks who has hemiplegia (the original star had cerebral palsy) while Ruth Madeley, who is in a wheelchair, plays Buckingham, who in this version of the play is honourable where Richard is manipulative. Both are great.

Monks dominates the play, as he is meant to, brilliantly and wittily charting Richard's course from deviousness (he gets Buck to fix the grade test results of one of his rivals) to fury (his hatred of the arrogant and unpleasant jock Eddie) to despair (when his plotting leads to the destruction of the girl he has loved.)

He's got terrific timing, pulling the lighting onto his monologues with a click of the fingers, and there is much fun to be had when he lapses into Shakespearean English and words such as "fucker-ed".

He also plays with precision with the play's central questions: does the way he looks condition the way society views him? How far can he escape from society's preconceptions of him? The contexts in which such thoughts are raised are challenging - most beautifully realised in an extended dance scene with Anne-Margaret (Siena Kelly, wonderfully conflicted) who uses dance (choreographed by Claira Vaughan) to celebrate exactly those disabilities which Richard thinks define him.

Monks is surrounded by an excellent ensemble and Michael Longhurst directs the entire thing with flair on a set by Chloe Lamford that brightly colours the simple certainties of high school life in the garish shades of a high school gym.

Teenage Dick is a play that is simultaneously a warning against the dangers of populist politics and a challenging corrective to society's view of disability.