Testament of Yootha "We laughed at the funny bits. Felt sad amid the pathos. But largely felt a great deal of warmth to both Yootha, and to @CarolineCooke19 for bring her so very much alive" 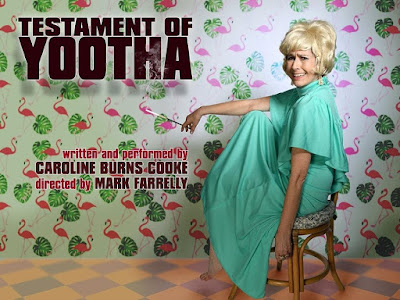 The show is an autobiography of popular 1970's sitcom star Yootha Joyce, forever remembered as the frustrated sexually predatory wife of long-suffering George in Man About the house and then in George and Mildred. But while RADA and Theatre Workshop alumni Yootha forever sought the limelight, she could have been a contender as a serious actress, she never really succeeded.

Here we see Yootha, dubbed "a lady who never complained" by Kenneth Williams, having had enough; enough of the fans, the typecasting, the brandy bottles, the summer seasons, the polo necks and the constant hiding of any feelings that might be dubbed less than ladylike. We fasten your seat belts, it was the last will and testament of a tartar in waiting. And this time she was going to be heard. She'd just have to live long enough...

Actress/writer Caroline Burns Cooke – creator of And the Rope Still Tugging Her Feet (Argus Angel for Outstanding Theatre and Outstanding Individual Performer at Prague Fringe) and Proxy (Infallibles Award nominee for Outstanding Theatre and Ike Award winner for Best Solo Show) – returns with this, her third show, to examine the life of glamorous sitcom legend Yootha: adored by friends and fans alike, hiding acute alcoholism from those closest to her, and (spoiler alert) dying at the tender age of 53.

We laughed at the funny bits. Felt sad amid the pathos. But largely felt a great deal of warmth to both Yootha, and to Cooke for bring her so very much alive.