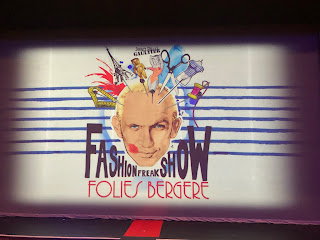 Back to the Freak show, it was an all-singing, all-sinning (sic.), all-dancing, camp, funny, occasionally moving, loose story of JGP's life. From dressing up his teddy bear in a conical bra, playing with his grand-mother's corsets, outlandish drawings at school, his brush with the Folies Bergère, his first disaster of a fashion show, the detractors, the admirers, Madonna, the bondage, moving to London, the fetish wear, the sex clubs, AIDS, men's fashion, women's fashion, the highs, the lows, the adoration... 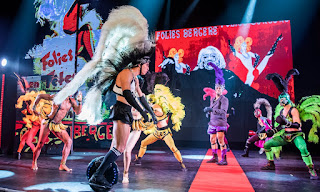 The show had lucha libre masks, lots of feathers, the conical bras (human size this time), banana skirts, and lots and lots of flesh. It had vogue battles, comic skits, catwalk strutting, and wacky dancing. In fact, it was as much a celebration of bodies and sensuality and sexual freedom as it was a fabulously fun romp through the French designer’s life and career. 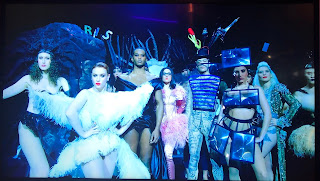 Everywhere the clothes were brilliantly theatrical, full of humour, beautiful constructed with sensuous textures. Gaultier’s genius rests on his mad juxtapositions: 18th-century pannier hoops and punk bondage, Mexican lucha libre masks with showgirl feathers, a dinner jacket turned into a toga or a half-leather-half-tutu number. It is hard versus soft, sexy versus silly; Gaultier sends up the ridiculousness of it all and yet takes his clothes deadly seriously. The more outrageously imaginative it gets (mocking the plastic surgery craze with extra limbs prêt-a porter) the better.

He laughed with it (and at it). We gasped. We oohed. We aahed. We laughed some more. We loved it. 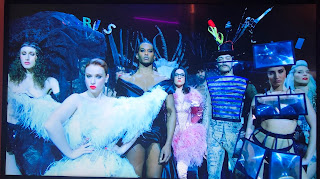 Was it gloriously self-indulgent or was it utterly, utterly fabulous? 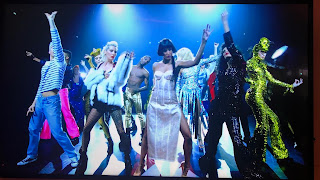 PS: I was at a bar once. Late 1980s. Well, I say bar, it was a fetish sex club called Fist. I was wearing army boots, large-hooped chain mail shorts and a smile. I was ordering a beer and as I reached over to pay for it, I felt a hand reach down the back of my shorts. There were large ornate metal rings on the hand's fingers that became entangled in the chain mail. I grabbed my beer and walked away. As I crossed the dance floor, a friend hissed in my ear, "Darling, you're dragging a French designer behind you!" It took three people to untangle JPG from my shorts. He apologised and bought me another beer.