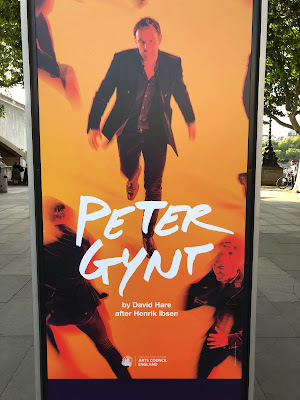 Yes, dear reader, Hare has reinvented Peer Gynt as a "riotous" adventure for the 21st century. This Peter Gynt is searching for something: himself. Traveling from the mountains of Scotland to the pool-sides of Florida, he meets talking hyenas, two-headed trolls and even an Egyptian Sphinx. But his ultimate transformation was not all that he hoped for…

Or indeed what we had hoped for either.

Playing the rebellious antihero, James McArdle (Angels In America) is reunited not only with David Hare but also director Jonathan Kent, the partnership behind the triumphant Young Chekhov at Chichester Festival Theatre and the National Theatre.

It was long play. Three and half hours. Initially funny, but started to drag somewhat in the third (or was it the fourth?)  hour. Yes, it's witty in parts, but rather like a shaggy dog story, it's incoherent ramblings somewhat outstayed their welcome.
Posted by overyourhead at Tuesday, July 16, 2019