The Lieutenant of Inishmore... 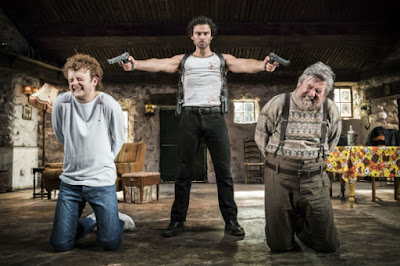 Last Wednesday night Stuart and I went to see jet black comedy The Lieutenant of Inishmore at the Noel Coward Theatre in London's glitzy West End.

‎Set in 1993 on the island of Inishmore Martin McDonagh's controversial yet very funny play tells the story of violent terrorist Mad Padraic, a vocal member of the Irish National Liberation Army and a man considered too unhinged for the IRA. But Padraic has a weakness. He loves his cat Wee Thomas.

Poldark's Aidan Turner plays the terrorist who we first see torturing a semi-naked, upside-down drug pusher. He has pulled out a couple of toenails and is preparing to cut off one or other of his victim's nipples. Yes, Michael Grandage's production doesn't shy aware from the visceral horror of the piece - to accompany the torturing, we have dead cats, multiple murders, blindings, shoe polish as food, and a set strewn with blood and dismembered body parts.

But it's not all gore. The comedy is as broad as it is deep - visceral even. These characters may not be the sharpest tools in the box but their humour is innate. They see the funny side of their lot. When Padraic bombs chip shops he does so because they are easy targets, "no one guards a chip shop. They're only chips, for feck's sake!". His bombs rarely go off anyway because he can't afford the good ones. "The IRA keep the best ones for themselves." Even when he loses his train of thought mid-torturing his victim quips to him, "well, it must have been a pretty slow train!"

Like Chris Morris' Four Lions, McDonagh's incompetent terrorists are daft, dangerous and very, very funny. If you like lots of blood and lots of laughs you're in for a treat.
Posted by overyourhead at Thursday, June 28, 2018