The Prime of Miss Jean Brodie is fabulous @DonmarWarehouse - review -> 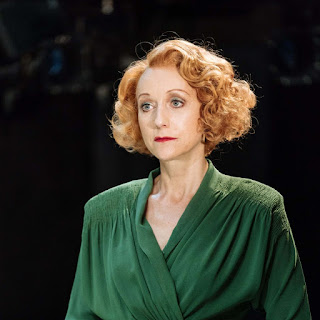 At Marcia Blaine School for Girls, Miss Jean Brodie (played by the marvellous Lia Williams) presides over her ‘set’, her chosen few. In return for their absolute devotion, Miss Brodie provides an education far beyond the confines of the curriculum. And she requires - no, demands - absolute devotion from her “ghells”.

Williams is nothing short of superb. She brings the beautiful paradoxes in Brodie to joyous life - she's a snob, she's contradictory, she’s naughty, she's a fan of Mussolini, she's a mother hen, she's full of airs and graces and she is very, very funny. We delight in seeing her determination to instil a love of art and beauty in her pupils juxtapose her own desires - as she negotiates her relations with a raffish art teacher and a shy music master. She is divine yet aching to be carnal.

Williams catches perfectly Brodie’s mix of verbal precision and gestural vagueness too. When she says of her detested head teacher, “Miss Mackay thinks to intimidate me with quarter-hours”, it is in the cut-glass tones of someone who uses words as weapons.

Yet when she informs the Vaughan Williams-loving music-master, “I am very fond of The Lark Ascending”, her hands spiral upwards in loose simulation of flight. Without a trace of sentimentality, Williams brings out all the contradictions in Brodie: the fastidious aesthete who is frightened of real passion, the mutinous teacher who praises 1930s Germany and Austria as “magnificently organised”.

We learn very early on who she is betrayed by - her star pupil Sandy (Rona Morison) - whose remorseless watchfulness is at times both awful yet full of awe. Brodie might yearn to know who betrayed her - but this is less important to us – unlike her, we saw her downfall coming a long way off. All beautifully played.

Polly Findlay direction is spot on as is Lizzie Clachan’s design. The production ebbs and flows beautifully between school to convent.