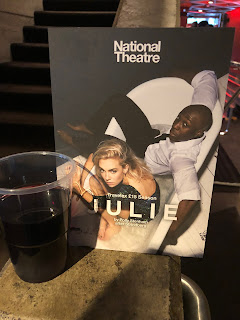 Based upon Miss Julie written by August Strindberg in 1888 the play caused a sensation back then as it will do now in it's modern day version. We see wild parties, drugs, sex, thumbing house music, booze, hedonism, privilege, exposure, shame, regret, tragedy and a lot of dishwashers.

Yes, the play has indeed been thoroughly modernised by Polly Stenham for the young modern audience. And it seems to have largely worked. The audience around us were dancing in their seats, gasping at the disrespect, and traumatised by the ending. Engaged throughout.

The fireworks of the hedonistic party scene contrasted perfectly with the shades of the encounters between the three principal characters - Julie (Vanessa Kirby, the daughter of the house), Jean (Eric Kofi Abrefa, her father’s valet), and in the household kitchen, domain of Kristin, the cook (Thalissa Teixeira, Jean’s fiancee).

Outstanding performances by all concerned.

Socially and politically pertinent then as now - I loved it.
Posted by overyourhead at Tuesday, June 05, 2018