Tina - The Tina Turner Musical. @adriennelwarren is sensational. The tag line should really read: Hit after hit after hit. (Thanks to Ike.) @TinaTheMusical #myTINA #simplythebest ... 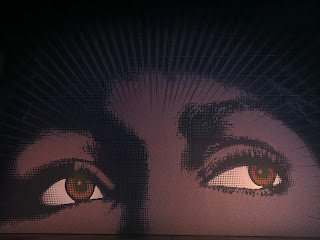 Last night Stuart and I went to see Tina - The Tina Turner Musical at the Aldwych Theatre in London's glitzy West End.

This highly anticipated musical is on the face it, let's be frank, simply a jukebox musical but that said, it was a very, very good one. It tells a story of tenacity, survival and ultimately celebrates a formidable woman of mind-blowing strength with incomparable talent.

It’s certainly not a Disney show though. It is frequently shocking, oft times breath-taking and somewhat heart-breaking. There is pretty strong language and some graphic bloody scenes of domestic violence too. But then it is based on Tina Turner’s remarkable life.

That said, there is also a lot of humour - especially the scenes with Heaven 17.

Adrienne Warren makes her West End debut in this production raising the roof and embodying Tina perfectly. She’s a star who gives 100% throughout the entire performance. She drives the show, she is the show. What a voice, what a talent, what charisma, what sexiness, what legs – the epitome of Tina.

The show includes such hits as:
The Best
What's Love Got To Do With It?
I Can't Stand The Rain
Disco Inferno
Private Dancer
Nutbush City Limits
Let's Stay Together
Better Be Good to Me
We Don't Need Another Hero (Thunderdome)
I Don't Wanna Fight
Open Arms
River Deep – Mountain High
Proud Mary

By the end, the entire audience were on their feet. Need I say more?

Recommended. Hit after hit after hit...
Posted by overyourhead at Friday, April 06, 2018