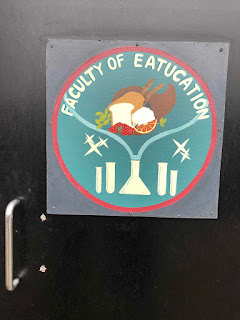 Last Friday Stuart and I got a text message at 4pm. It told us where to go and to be there for 7pm. It also said, "During your time at our facility please wear an apron over your normal attire. Comfy shoes are also advised. Don't worry, all will become clear at the event." That was it.

We were dead excited though - as we were going to the latest Gingerliners event.

Gingerline's Dream Dinners is one of a series of experimental dining projects where new and innovative dining methods will be tested on London's food adventurers. Part culinary playground, part experiential laboratory, the Dream Dinners promises to take diners back to Gingerline roots with these more intimate, single room, food focused experiences.

Gingerline are one of the pioneers of London’s now flourishing alt-dining scene, and for the past 8 years have been serving punters a mix of flavours, food, interaction and some audience participation. And this time it was no different.

I can't give too much away other than the food was good, the cast fabulous, there was a quiz/learning aspect to the night, and a disco ball makes a guest appearance. The night was essentially an expanded version of one of the most successful rooms in a previous Chamber of Flavours adventure.

In fact, we had such a good time I forgot that I left my credit card behind the bar and we had to go back the following night to retrieve it. As I entered the room that second night I was welcomed with open arms like a conquering hero. Nice people Gingerline.