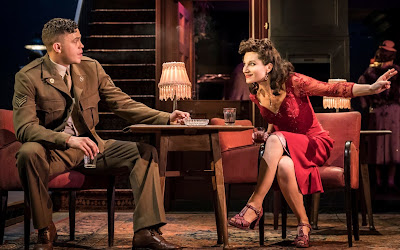 The critics have not been kind to Ackland's 1952 play - either on it's first outing or in this, its latest National Theatre incarnation. But I beg to differ.

Originally entitled The Pink Room the story is set in a Soho drinking club just after the war. The many failed artists, self-declared artists, bohemians, black marketeers and slumming socialites who frequent the club (loosely based on Muriel Belcher’s Colony Rooms) are not particular likable but then, for that very reason, perfectly realistic.

Anyone who has spent any time in a late night drinking den or at a pub lock-in will recognise the scenarios in this play; failed love-lives, failed requests for sex, prat-falls, missed calls, deep discussions of what and when to eat, who to vote for, arguments over who buys the drinks, who to cadge a fag off, and all to the refrain of "can you lend me a couple of quid?". The micro-dramas of the paralytically drunk.

We are in the drunken Soho world of Lucian Freud and Francis Bacon.

Thirty actors ramble around the stage, loosely corralled by Joe Hill-Gibbins direction, living out their self-indulgent lives for just over three hours. But for us, the time flew by.

From the moment the entire cast trooped in front of the curtain to sing the Edith Piaf standard, La Vie en Rose, we knew we were going to love it.

My only mild criticism of the play might be that set was a little too expansive. Those sorts of drinking clubs tended to be claustrophobically cramped.

"What is that strange smell was in here?"
"Failure".

Foot Note: Absolute Hell includes a tweed-suited lesbian wearing a ginger clown wig. She waddles about, is very rude, is denounced by the main writer character for ruining his career – and then promptly dies on stage. Playwright Rodney Ackland added the character as an act of revenge on the Sunday Times critic Harold Hobson, who had declared that the first-night audience in 1952 had been present "if not at the death of a talent, at least at its very serious illness". Ouch!
Posted by overyourhead at Monday, April 30, 2018