Caroline, Or Change - The show is fantastic and soon to transfer to the West End (and I can see why.) @Hamps_Theatre #HTCaroline Review ---> 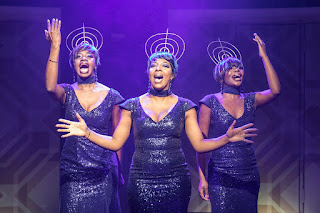 Last Friday night Stuart and I went to see a revival of strange, witty, pulsing opera-musical Caroline, Or Change at the Hampstead Theatre in London's glitzy Swiss Cottage.

Caroline, or Change is through-composed with book and lyrics by Tony Kushner and score by Jeanine Tesori that combines spirituals, blues, Motown, classical music, and Jewish klezmer and folk music.

Set in Louisiana in 1963, the story starts from the relationship between a young Jewish boy, Noah (Charlie Gallacher), and his family’s exploited black maid, Caroline (Sharon D Clarke). When Noah is encouraged to leave the small change in his pockets as a gift for the underpaid maid, not only is Caroline insulted but the gesture opens up the racial, social and economic divisions of 1960s America. The word "change" takes on multiple meanings that are dramatically exposed in a scene where black servants cook the Jewish family’s meal at Hannukah and where there is a big showdown between Noah’s revolutionary grandfather (Teddy Kempner) and Caroline’s militant daughter (Abiona Omonu). 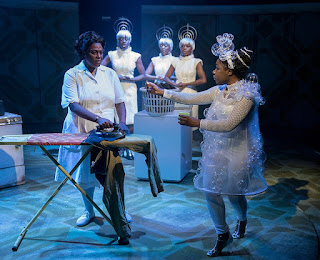 But there is much humour to be had here too. Caroline's washing machine sings to her, her dryer sings to her, and her radio is a three part harmony group akin to The Supremes.

The show is fantastic and soon to transfer to the West End (and I can see why.)
Posted by overyourhead at Thursday, April 26, 2018