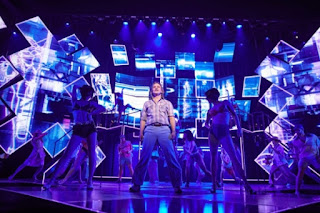 Last night Stuart and I went to see the first preview of the first major West End revival of the musical Chess in over 30 years at the London Coliseum in London's glitzy West End.

Written in 1984 by ABBA songwriters Benny Andersson and Björn Ulvaeus, and Tim Rice, Chess tells a story of love and political intrigue, set against the background of the Cold War in the late 1970s/early 1980s, in which superpowers attempt to manipulate an international chess championship for political ends.

Two of the world’s greatest chess masters, one American (Tim Howar), one Russian (Michael Ball), are in danger of becoming the pawns of their governments as their battle for the world title gets under way. Simultaneously their lives are thrown into further confusion by a Hungarian refugee (Cassidy Janson), a remarkable woman who becomes the centre of an emotional triangle. Tensions are further tightened when the Russian's wife Svetlana (Alexandra Burke) arrives. This mirrors the heightened passions of the political struggles that threaten to destroy lives and loves.

The show includes the international hit singles "I Know Him So Well" and "One Night In Bangkok". Other well-known songs from the score include "Anthem", "Someone Else’s Story", "Heaven Help My Heart" and "Pity The Child". 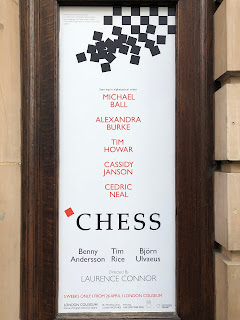 Michael Ball and Alexandra Burke were both superb. Cassidy Janson sang like an angel. But Tim Howar... well, we only saw half of him.

Half? Well, regular reader will know how very unlucky we are with going to see early previews of West End shows: floods, ill-prepared shows, misbehaving sets, gas leaks, lead actors dropping out - have all contributed to numerous occasions of us sitting in our seats listening to theatre managers with a microphone in hand standing on stage telling us the show is being cancelled. When will we learn, eh? Never, it appears. And so back to last night...

At the end of the first half the normal 20 interval went on, and on, and on. We took our seats for the second half but 45 minutes later and still the curtain had not come up. It wasn't looking good. Then the director Laurence Connor came on stage (oh no!). Lots of apologies... explanations of how hard everyone had worked on the show... how little prep time they had all had... etc. etc.  (we could just see the headlines "CHESS CANCELLED!")... but then...  he said... "Tim Howar's wife has just gone into labour so he has left the theatre!" (Wowie! Some may think that is highly unprofessional. But I'm not like that.) "But Cellen Chugg Jones would be stepping into the part of the American in the second act. He has very little experience with the staging and blocking but he knows the songs." Not ideal, but we were just relieved the show was going to continue!

As it turned out Cellen Chugg Jones was fantastic. He had a great voice and got a thunderous standing ovation at the end. He had saved the show! But, gosh, that was a close run thing. 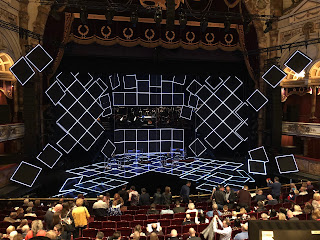 Patrick Woodroffe's lighting direction perhaps needed a little tweaking - as we sat in the Dress Circle we got blinded a few times by some of the lighting effects and more than once the stage hands were lit-up plain to see as they removed furniture from the pit and our eyes should have been directed elsewhere. Terry Scruby's video design was Ok too but the delay between vision and sound was annoying. It is very off-putting to hear the beautiful voices out of sync with the extreme close-ups of the singers.

But, as I say, a very good show if not a great one. And nice to have a bit of ABBA back on the West End again after so long, so long, so long. (yes, there were a few ABBA references during the show for the eagle-eared)
Posted by overyourhead at Friday, April 27, 2018